ISLAMABAD: Former President and Army Chief General (Retd.) Pervez Musharraf was indicted in the treason trial which is being heard by the Special Court in Islamabad on Monday (today). 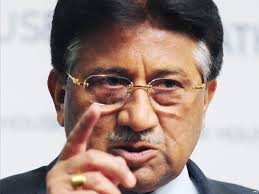 military ruler of Pakistan. The court remarked that Pervez Musharraf broke the constitution after imposing emergency in the country in November 2007.

Musharraf refused to accept the charges against him. “I am not guilty”, he added. Earlier, the former military ruler had appointed Barrister Farogh Naseem as defence counsel for the hearing as other lawyers of Musharraf had bycotted the court proceedings. General (Retd.) Pervez Musharraf had arrived at the Special Court for the hearing of the treason trial earlier today. Heavy security measures were taken on the route and at the court for presenting Musharraf before the Special Court. Special Court had issued non-bailable warrants against Musharraf and ordered Police to present him before the bench today.

Defence Counsel Farogh Naseem pleaded the court to remove his client’s name from the Exit Control List (ECL) as his mother is ill and he wants to attend her. The verdict is expected to be announced today at 02:00 P.M. Pakistan Standard Time. It should be noted that the court had already framed five charges against the former president earlier today.