Bollywood star-actor Hrithik Roshan and his wife Sussane officially filed for divorce today after announcing their split in December 2013. 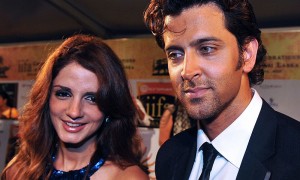 Both were present at the Bandra-family court in Mumbai and the divorce was filed with mutual consent of the two parties. No allegations were leveled against each other.

The hearing of their case is scheduled tentatively for October 31. It has not been decided as to who will be granted the custody of their two children Hrehaan and Hridhaan.

Roshan comes from a well-known Bollywood family. His father, Rakesh Roshan, is a film producer and director whereas Sussanne is the daughter of actor Sanjay Khan.

They were childhood sweethearts who tied the knot in December 2000.

In a statement issued to the media in December, Roshan said that Sussanne had decided to end their 17-year-old relationship.