ISLAMABAD: People from different religious minorities celebrated the Hindus festival of colours ‘Holi’ with zeal and zest at the Pakistan National Council of the Arts (PNCA) here the other day. 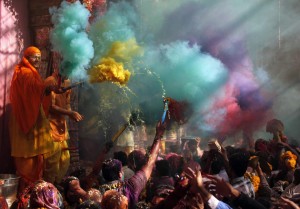 Mohammad Yousaf was the chief guest on the occasion.

Speaking on the occasion, the minister greeted the Hindu community on Holi and stressed the need for interfaith harmony among all religions and faiths, assuring government’s full cooperation to celebrate all their religious festival with freedom.

Bhajan, arti and different dances on Hindu songs were performed by arts groups on the occasion.
An official from the ministry told APP that Holi welcomes the spring season with all its traditions by Hindu community in different parts of the world including Pakistan.

The festival of colours is celebrated in the areas of Hindu majority while in Pakistan, the Hindu minority also celebrate this with play of colours in their communities and also burn logs of wood to symbolise victory of good over evil and observe Holi pooja.

The festival brings spring after winter with bright yellow mustard fields, blazing orange colour in the air and other vibrant hues to display the blooming treasures of nature.

The members of Hindu community throw colours blended in water, powdered colours and splash colour filled balloons to fill the atmosphere with the joy of festivity while it is also the first major festival of Hindus in the year.

The festival is celebrated after the full moon in March each year and the day before Holi is Holika, which commemorates the victory of good over evil.

The festival of colours rejuvenates the spirit of fun, freedom, love, respect and happiness to blend myths with religion for promoting harmony.