Forward scores his first goal of the 2014 World Cup to take the two-time winners in the semi-finals of Brazil 2014.

Gonzalo Higuain’s superb early strike secured a nervy 1-0 win for Argentina against Belgium and sent the South Americans through to the last-four of the World Cup for the first time in 24 years. 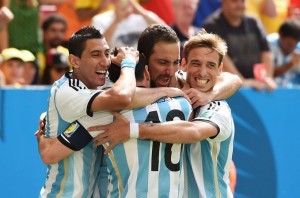 Higuain buried a shot into the corner of the net in the eighth minute at the national stadium to set up a semi-final clash against 2010 runners-up the Netherlands or surprise package Costa Rica, who play later on Saturday.

The 26-year-old Higuain reacted brilliantly when an Angel Di Maria pass was deflected towards him off Belgium defender Jan Vertonghen. He swivelled and struck the ball first time as Argentina ended a run of being eliminated in the last-eight at the two most recent editions of soccer’s global showpiece.

Belgium, whose best World Cup run was in 1986 when they were knocked out by Diego Maradona’s Argentina in the semi-finals, had a couple of chances but otherwise offered little in attack despite sustained late pressure that set nerves among the thousands of Argentines thronging the giant arena jangling.

“It’s a great joy for this squad, for the technical staff, for the people, for my family. We all crossed the Rubicon,” said Argentina coach Alejandro Sabella.

“It was the best in terms of the balance and play,” he added of his side’s quarter-final performance against the Belgians.