Over 150 scholars, academics, entrepreneurs, community leaders, diplomats and youth participated in Halal Expo Australia 2016 but it has been unfortunate the way Australian national media overplayed by manipulating news reporting with sensational headlines

One of the basics I learnt when I started journalism over 2 decades ago that in journalism a journalist or media works in the public interest. The Role of a journalist is to document the facts and findings fairly, unbiasedly and present to the public in such a manner that it should not create any disharmony, unrest, or any kind misunderstanding among the recipients instead information and knowledge on the facts. Journalism is a discipline of collecting, verifying, analyzing and presenting the stories in fair and neutral manner including trends, issues and people as media makes minds. Therefore, the role of the media should be to inform, criticize and educate the recipients on the subject rather than exploit the subject in order to market the story for ratings and commercial gains. Similarly, media is supposed to be the outlet of professional finesse and grace, giving an edge to their commitment to serve the public interest rather than creating fear and unrest. When it comes to a multicultural society as we have in Australia, a journalist or media should be extra careful while documenting and reporting their work to avoid disrespect of any faith, culture and race rather than creating fear and differences between the people of different faiths and ethnicities. 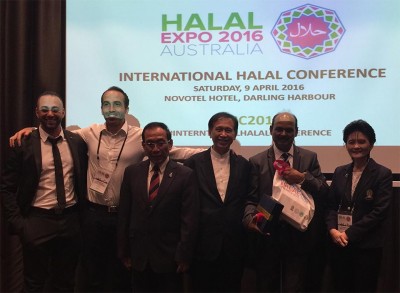 It has been unfortunate the way Australian national media has reported the minor clashes between two right and left groups that were not in any way linked to Halal Expo Australia but they chose the premises of their adventure outside the venues of the events of the Halal Expo Australia 2016.

The IHC 2016 was an international event where over  150 scholars, academics, entrepreneurs, community leaders, diplomats and youth participated as the local and foreign delegates. 4 top foreign speakers from Singapore, Thailand, Malaysia and Canada and 8 well known Australian speakers participated in this conference. IHC was the first international event of its kind that addressed the most critical issues related to Halal Industry in Australia. Hence it was the most informative and knowledge driven event for the media to cover for their recipients yet this event was ignored by the Australian media except one or two freelance journalists. I cannot find any reason of the ignorance of the media about IHC as they all aware of the Halal Expo Australia and its events and progressively covering the minor protests/clashes between 2 groups outside Halal Expos’ events. The only reason I can think is that there wasn’t any substance of excitement to make another ‘hot’ story to sell.

The two halal expos in Melbourne and Sydney were absolutely multicultural family events where people from different ethnic backgrounds attended in thousands. The Australian business community and professionals dealing with Halal products & services took part in these events to promote their business services, then there was entertainment and amusement activities for all ages. The members of parliament, community leaders, foreign delegates, and people from all walk of life and about 10,000 people from different backgrounds attended this event and displayed the remarkable sprit of Australia values respecting each other faith, cultures and life styles. Again, Australia media ignored these events, no coverage, no reporting, no news of what happened inside. On the other hand, over exaggerating coverage in headlines of the minor protest/clash between two right and left groups who were not more than 30 in total.

The level of overstatements in news making of minor protest/clashes was skilfully incorporated in the published stories. For example; some media referred the outside protest/clash as using ‘in the halal expo’ where the fact of the matter was that there wasn’t any incident of any kind occurred in the Halal Expo. One national media published the story with headline ‘Halal festival brawl latest incident in Melbourne’s multicultural battle’. Another media outlet published the story with headline ‘Anti-Muslim and anti-racism protesters ‘intensely’ clash outside Melbourne’s Halal Expo’ with an image of a man with bleeding from his eyebrow. I later found from an eye witness that the injury of this man wasn’t the result of any fight but he hurt himself with a rod of a placard. SBS a media outlet run by public funding published a story even after few days to the Halal Expo Melbourne but couple of days before the Halal Expo
Sydney with the headline ‘Anti-Halal protesters prepare for further violence at upcoming Sydney expo’ – I take this type of story prior to this family event as a scare campaign against the event. The fact of the matter was that nothing happened, no any clash or violence occurred, in Halal Expo Sydney. Now would SBS make another story highlighting that there wasn’t any incident as predicted by SBS outside or in the Halal Expo Sydney?

One cannot understand the purpose of these kinds of manipulations in reporting and news making with sensational headlines by the media except that they find Halal Expo Australia another opportunity to create saleable stories for their outlets.

Media plays an important role in understanding complex issues on national and international matters. Is the  Australia national media helping to promote multicultural events? This is a question mark now for the multicultural campaigners and for those sitting in government to assess the media performance. Does this kind of media reporting that can create unrest, misunderstanding and differences should be allowed in the Australian free society where we all enjoy the freedom of speech? Is the media crossing limit and taking advantage of our freedom of speech? This is now an important matter we all have to think about and address.

(The writer is the director of Halal Expo Australia 2016, recipient of NSW Premier Harmony Award 2014, an educationist and an international journalist.)

DAYLIGHT SAVING ENDS ON THIS SUNDAY

CONSENT APP WILL LEAD TO FURTHER CONFUSION AROUND LAW