The world’s Muslim population is growing twice as fast as the non-Muslim population. In the next 20 years, the annual growth rate of Muslims is expected to increase from 0.7 percent to 1.5 percent. According to a PEW research study, if this trend continues, Muslims will make up around 27 percent of the world’s total projected population of 8.3 billion by 2030.

More than 20 percent of the world’s Muslim population live in non-Muslim countries – particularly in the West. 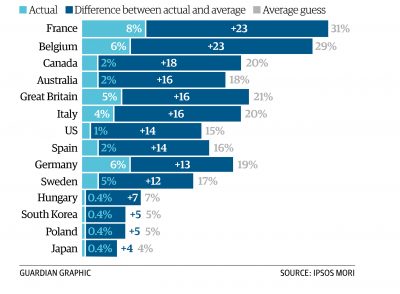 According to report compiled by an Australian Professor Riaz Hassan of Hawke’s International Centre for Muslim and non-Muslim the existing and official percentage of Australian Muslims of 2.2 will increase to 4.9 percent by 2050 which means one million more Muslims in Australia by 2050. 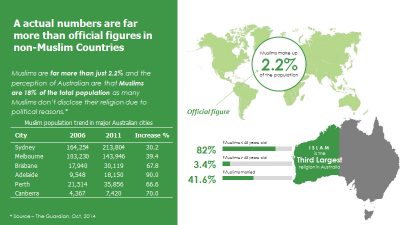 Australia, an increase of 137% since 1966 as a result of natural increase and immigration. In 2011 about 40% of Australia’s Muslims were Australian born and the rest came from 183 countries. In 2011 Islam was Australia’s third largest religion with Australian Muslims constituting 2.2% of the country’s population. Australian Muslims are largely city dwellers living in large urban enclaves primarily in Sydney and Melbourne, and the numbers of Muslims in other major urban centres like Brisbane, Adelaide and Perth are increasing. In fact between 2006 and 2011 these cities had significantly higher rates of increase in their Muslim populations than Sydney and Melbourne. If the population continues to grow like as today, Islamic will be the second largest religion in Australia 2050 with the population to be increased by 4.9 and will add another 1 million Muslims.

The Australian published a report of ‘’The Guardian” on in 30th October 2014, and according to this story the

Muslims are far more than just 2.2% and the perception of Australian are that Muslims are 18% of the total population as many Muslims don’t disclose their religion due to politician situation. The phrase, “necessity is the mother of invention” illustrates the needs of Muslims living in non-Muslim countries, where they desire to live their daily life – from eating, drinking, travelling, working or trading – in accordance with Islam.  This is the reason the need for Halal will only grow in these new markets.

The increase in demand creates increase in business, trade and production that is why today the Halal market is one of the fastest growing consumer segments in the world, with an estimated worth of $2.3 trillion. The global growth rate of the Halal industry is estimated to be 20 percent – or about $560 billion annually.

Like other non-Muslim countries; with the continuous increase in Muslims in Australia, their needs are developing significantly the Halal Market. In Australia, according the various sources, the halal businesses are expanding at the rate of over 20 percent per annum. The Halal market is no longer simply meat and food products. It has grown to encompass other aspects of everyday life from pharmaceuticals, cosmetics and health products to professional and technological services such as print and electronic media, legal services, medical services, health and fitness, branding, packaging, logistics, financing, investments and so on.

According to selected findings from the State of the Global Islamic Economy Report 2015/2016, the global Halal food and lifestyle sector is expected to grow by 6% by 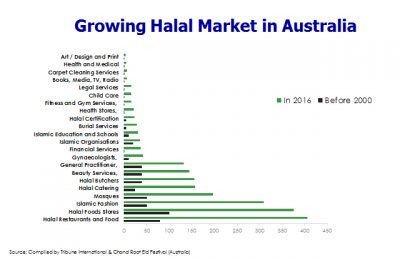 2020. The global Muslim market spent $142 billion on travel in 2014, and is expected to reach $233 billion by 2020. The most popular destination countries for Muslim tourists are Malaysia, Turkey and the UAE. To meet that growth, new channels are being created, such as HalalBooking.com, a travel search and booking website for Halal-conscious travelers. The website expects their bookings for their Turkey-based hotels to reach 10 million per hotel by the end this year and in 2016.

The significant growth of Halal market while delivering new opportunities for businesses operators and professionals, is not without its growing pains – especially in non-Muslim countries.

In the absence of regulatory bodies, government supervision, or other monitory systems in many non-Muslim countries like Australia, the Halal industry is facing standardisation uniformity issues in Halal certifications. In Australia, there are over 20 different Halal certification bodies run by various Islamic organisations.  Due to their professional competitions, they are incapable of sitting together and forming a unified standard Halal certification process that can be acceptable and implementable for all parties. The anti-halal groups cashing this deficiency for their own anti-Muslim and anti-halal agenda. The media utilise these issues for their own interest and that create a fear among the halal business: http://www.pickeringpost.com/story/the-end-of-private-halal-certification-in-australia/5559. Boycott halal group on social media: https://www.facebook.com/BH.Australia/

I have experienced that the Muslims in the western world, like Australia, are sceptical as to the authenticity of available Halal products due to opinionated or interpretational differences between Islamic leaders representing different sects and ethnicities. Regrettably, there are divisions within the Muslim Ummah on the name of sect, culture and ethnicity that have divided Muslims on their own Islamic practices. Whereas a common Muslim looks for knowledge on Islam as genuine, simple and according to Quran and Sunnah.  This creates confusion as to what is truly Halal.

Islamophobia, and how it is portrayed in western media, is a threat to the Halal market. If I talk about Australia, after terrorism, Halal is another controversial topic the media gravitates to. Anti-Halal groups, even though they are very small in number, receive a disproportionate number of media coverage. For example; when we had over 10,000 people present at the Halal Expo Australia in 2016, there were only 20 people outside the venue raising signs and shouting anti-Halal slogans, but Australian media gave coverage to those few agitators outside the venue and zero coverage to the record gathering at the Halal event.

As was stated previously, there are people, who are trying to link the cost of Halal Certification with financing to terrorism. Even though there has been no evidence whatsoever that proves – or even suggests that – the funds being generated through Halal Certification by the Halal Certified bodies or that they have any link with fanatic or extremist groups.  Despite this  non-existance of evidence, and in the face of clear bias, the media still allows those who are campaigning to ban Halal products in Australia their voice – again giving large exposure to a relative few.

We started Halal Expo in Australia in 2015 and since we started the anti-halal groups are running anti-halal campaign and demonstration outside our events: “Violent brawl at Halal festival in Ascot Vale

A Halal food festival has been rocked by a violent brawl between anti-Islam protesters and far-left activists.

About 30 far-left protesters wearing black clothing and balaclavas, believed to be part of the anti-fascist Antifa group, swarmed a group of right extremists, including members of the United Patriots Front, Reclaim Australia and other anti-Halal activists.” The AGE dated: April 3, 2016 (a mainstream newspaper of Fairfax)

This is a biggest challenge for Halal events’ organisers, halal certification bodies, and halal business operators in non-Muslim countries.

Among non-Muslims, especially in non-Muslim countries, I have experienced large-scale misconception, misunderstanding and misinformation on what Halal actually is. In Australia, anti-Halal campaigners have employed this lack of understanding about Halal and the process of Halal certification to fuel their own agendas. They have, for example, accused Halal certification bodies of financing terrorism, despite a complete lack of evidence that the funds being generated through Halal certification by the Halal Certified bodies are in any way leaving the country, let alone financing terrorism. Yet the responsibility for educating the public on what Halal truly is falls to the Halal certification bodies themselves, which should include open sessions and forums detailing the information on their income, spending and welfare projects.

Regardless of the issues facing Halal, the needs of the growing Muslim population are increasing.  Consequently, the Halal market is growing day-by-day and becoming a major competitor with mainstream commerce in non-Muslim countries.  For example; 10 years ago, there were no Islamic finance & investments companies in Australia.  Today there are several multi-million dollar companies who are competing against traditional, mainstream financial companies. 20 years ago, there were only a handful of Halal restaurants and butcher shops in all of Sydney.  Now there are 5 to 10 Halal food businesses in every major suburb of the city. In some cases, the Muslim-dominated suburbs have more Halal food & products outlets than non-Halal ones. There is even a new trend of changing non-Halal food to Halal by ethnic restaurants.

With the continuous increase in Halal businesses the Islamic organisations and Halal certification bodies are also feeling pressure from business operators to deal with their issues and find solutions. They are looking for a uniform, simple and economical way of obtaining Halal certification.

Halal Expos, assemblies, conferences, forums and seminars being held in the major cities of non-Muslim countries are not only promoting Halal products & services and building a Halal market network, but are also providing an indispensable platform for industry players to address the issues, challenges and threats facing the Halal industry as well as providing a venue for finding solutions to these problems. For example; in Australia, the creation of the Halal Expo Australia and Conference last year, was a direct result of the growing need for a platform where Australian Halal businesses can be promoted, issues and challenges can be addressed, and resolutions can be explored.

(The writer, Syed Atiq ul Hassan, is the founding director of Halal Expo Australia & International Halal Conference Australia – www.halalexpo.com.au . This write-up is the extraction of his talk/presentation at the Thailand Halal Assembly 2016 held on 9-11 Dec 2016 in Bangkok, his email is director@halalexpo.com.au ).