Karachi: The sporting ties between India and Pakistan may have been hit by border tensions but come November, 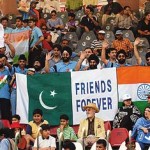 retired cricket greats from both the countries will be seen in action in a World Masters Series in the West Indies.

A T20 World Masters of Cricket tournament has been scheduled in Barbados from November 1 to 10 with teams from Pakistan, India, West Indies and England scheduled to take part in the glittering event.

“It is going to be something different and cricket fans from around the globe will get a chance to see former greats resume rivalries in the Twenty20 format,” a local organiser told PTI.

He said the organisers have already spoken to players from all four countries and got necessary permissions for the event.

“We are close to finalising deals with cricket legends like Inzamam-ul-Haq, Brian Lara, Rahul Dravid, Shoaib Akhtar, Courtney Walsh, Graeme Hick and others,” the organiser, who declined to be named, said.

He said the tournament rules are such that participants should be aged above 35 before the start of the event and they must have represented their respective countries in either Tests or One-Day Internationals.

“Because we plan to make this a permanent event if our first attempt is a success. We are hopeful it will be successful after seeing the response the Caribbean Premier League got recently,” he added.

Former captain Inzamam has been given the responsibility of putting together the Pakistan Masters team and it is likely it will feature Shoaib Akhtar, Mohammad Yousuf, Saqlain Mushtaq, Mushtaq Ahmad, Asif Mujtaba, Rava Navedul Hasan, Rashid Latif, Shabbir Ahmad, Asim Kamal, Yasir Hameed, Arshad Khan while the quartet of Moin Khan, Waqar Younis, Saeed Anwar and Azhar Mahmood as per their availability.