ISLAMABAD: Adviser to Prime Minister on National Security and Foreign Affairs Sartaj Aziz informed the Senate’s Foreign Affairs Committee on Monday that Saudi Arabia had gifted $1.5 billion to Pakistan and added that the country 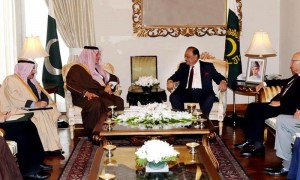 would not send arms to Syria or to any other country undergoing a civil war.

The committee on Monday asked the government to refrain from making any change in its policy over Syria because of the ongoing conflict in the Arab country. Aziz categorically stated that Pakistan would not send arms to Syria or any other country facing internal strife. The Senate committee, chaired by Senator Haji Adeel, also called for maintaining brotherly relations with Saudi Arabia and Iran, saying ties with one should not be on the cost of other. The committee, which held an in-camera meeting, had hard questions about $1.5 billion received from Saudi Arabia, which Sartaj Azia dubbed as “gifted money” from the friendly country.

However, members of the committee were not satisfied with the response of the “gifted money”. According to sources privy to the meeting, committee recommended the government to keep a vigil on sale of weapons of Saudi Arabia to check its supply to third country. “It should be ensured that the sold Pakistan weapons should slip down to the hands of Syrian rebels”, committee members emphasized. Giving details of the Saudi sum received by Pakistan, the adviser said “the grant given by Saudi Arabia is unconditional and in return Pakistan is not supposed to give anything to the kingdom”.

Aziz also confirmed the purchase of weapons by Saudi Arabia, however, he added that the kingdom would not use these weapons against any other state. About relations with Iran Advisor told the committee that Prime Minister Nawaz Sharif would soon visit Iran for which dates are being worked out by both governments. The committee was also briefed by Foreign secretary on the state of overseas Pakistanis in Jeddah and steps being taken for Pakistan consulate in Jeddah for the welfare of these Pakistanis.

Moreover, committee-member Senator Mushahid Hussain Syed of PML-Q moved a resolution condemning the incidents of terrorism in China and also expressed solidarity with the neighbouring country. It recommended that Pakistani soil should not be allowed to use for attack against any country. About MFN Status to India, committee recommended that it should not be done in haste and it should be put on hold till the new government took over in India. Committee sent the debate carried out on recent visit of CIA chief to Pakistan recently to Ministry of Defence. The committee put on hold the bill “Ratification of Foreign Treaties from Parliament”, moved by Senator Raza Rabbani.