GOOGLE is reportedly set to splash up to US $1 billion on a company that allows people to watch others playing video games live. 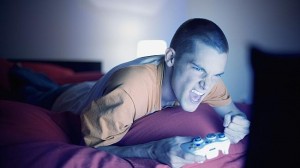 Google wants to buy Twitch in order to merge its 45 million users with its YouTube users.

Twitch, which streams video of people playing video games, was launched in June 2011 and has already surpassed Facebook, Amazon and Hulu in terms of traffic. That puts it fourth, just behind Netflix, Google and Apple.

Twitch reportedly rejected an offer from Microsoft and is more interested in partnering up with Google because it also owns YouTube.

Those who use Twitch are spending almost 2 hours a day watching others play video games. More than 6 million videos are broadcast every month.

Twitch has been integrated into Sony’s PlayStation 4 and Microsoft’s Xbox One consoles. PS4 enjoyed a boost of 100,000 broadcasters in November after its release.

There are also Twitch apps for Apple and Android, but at the moment they’re for watching and chatting about videos, rather than broadcasting.

Gaming channels like PewDiePie and Stampy are already big on YouTube. PewDiePie is the most popular channel on YouTube, which is why owning Twitch would significantly boost YouTube’s views.