GOOGLE Earth sometimes feels like an interesting but pointless toy. The images are dated and once you’ve checked out your own roof or neighbourhood, you may exit the site with an empty feeling.

It appears that Google Earth and sibling Google Maps have been mere dress rehearsals for Google as it enters a new era of total global coverage, with images that are not only updated several times a day but able to provide high-definition video. 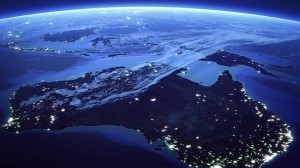 It will also provide business competitors with real-time tools to monitor each other’s activities.

The Wall Street Journal recently reported that by 2018, Google’s Skybox will have 24 satellites in the air, able to cover the globe with updated images three times a day.

Numerous implications flow from this.

Previously, Google bought satellite images off companies such as Digital Globe, which has been providing the targeted imagery for George Clooney’s Satellite Sentinel Project, which attempts to monitor real-time military abuses in southern Sudan.

Now that Google owns its own satellites it will become not a re-publisher, but a publisher, meaning it will bear responsibility for the images it puts to the world.

This will become telling as image clarity is about to shift from 50cm down to 25cm, with a further push to take it down to 10cm.

At this rate it will not be long before things such as numberplates — and royals sunbaking in backyards — could become clearly visible.

No doubt such clarity will have uses for law enforcement, but it will also test the bounds of personal, corporate and government privacy.

This request was apparently withdrawn after it was deemed there was no real risk.

“In order to bring people an accurate and rich mirror of the world through our maps, we do not blur imagery in Google Earth,” said a Google Australia spokesman.

That may change, but it appears there are no clear laws in this area. Satellite providers are not required to go through any deletion or blurring process, but may do so upon request (as in the case of the royal palace in the Netherlands).

As Skybox gets going, sending an unprecedented swarm of commercial satellites into near-space, Google will no longer be able distance itself from the security implications, but its priority will be selling imagery to big business.

Skybox co-founder Dan Berkenstock told the WSJ they were looking at the Foxconn factory, in Taiwan, to study truck movements to learn when the next iPhone was coming out; and that it could predict how much oil was coming from the ground in Saudi Arabia or the likely yield of a nation’s crops.

Such information could prove equally useful to business or mobilising the world, in the case of poor crops, to pre-empting famine.

All Australian Defence sites, including those run in conjunction with the US such as Pine Gap, are currently clear enough on Google Earth.

The thinking is that everyone knows where they are anyway, so there’s no real point getting anxious.

But with Google set to rule the skies with Skybox, this will need to be rethought as satellite resolution gets much sharper and immediate high-resolution video could be bought, for instance, to show activity at a submarine base or an offshore oil rig.

With this, another complementary threat becomes more problematic: cheap drones that can carry bomb payloads.

Google Australia says its most popularly visited sites are the capital cities, and these were the images it sought to refresh most often (it declined to say how often it updated them).

Google Earth, Maps and Street View will remain the public face of its sites, but there may be a reckoning as the satellites close in on planet Earth.

Purdy, from the University College of London, has been to Australia to study use of satellites in NSW to monitor compliance with land clearing — which he sees as best-practice satellite use.

But he says it is time for an international discussion whether the incoming wave of new real-time imagery is a part of our new free speech, or a public risk.

“To some degree, open data and the public’s right to know is quite a good thing, and people are more open about it,” he says. “Look at Facebook. You don’t see too many people complaining about shared data.

“I personally think there should be more of debate at international level before it gets out of hand.

“You have tech people pushing, but they don’t really say why it’s so important to be able to see resolution at 25cm or 10cm. No one really knows.”