Google announced it is working with iconic US jean maker Levi Strauss on fabric that can sense touch gestures. Using a new kind of conductive yarn and woven multitouch panels, they can turn normal clothes into interactive devices.

Called Project Jacquard, the initiative was officially announced at Google’s annual developer conference on Friday. Levi’s is its first official clothing partner, and the two Bay Area companies will start designing and experimenting with smart clothing.

Named after a Frenchman who invented a type of loom, Project Jacquard is in the hands of a small Google team called Advanced Technology and Projects (ATAP), which is different from the Google (x) lab that developes big-vision innovations such as self-driving cars.

“We are enabling interactive textiles,” Emre Karagozler of ATAP said as the smart fabric was shown off in an area set up to look like cloth coming out of a loom.

“We do it by weaving conductive threads into fabric.”

The special threads can be woven into a wide array of fabrics, and be made to visually stand out or go unnoticed depending on designers’ wishes. 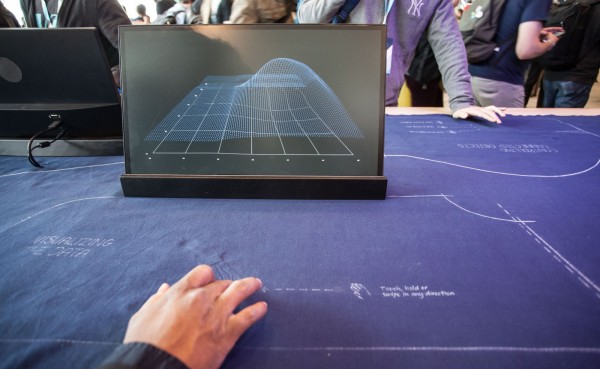 Conductivity can be limited to desired parts of fabric or spread across entire cloth.

“It is stretchable; it is washable,” Karagozler said as people controlled lights or computer screens with finger strokes on a blue cloth covering a table in the display area behind him.

Project Jacquard makes it possible to weave touch and gesture interactivity into any textile using standard, industrial looms, according to Google.

Anything involving fabric, from suits or dresses to furniture or carpet, could potentially have computer touch-pad style control capabilities woven.

Conductive yarn is connected to tiny circuits, no bigger than jacket buttons, with miniaturized electronics that can use algorithms to recognize touches or swipes, ATAP said.

The data can be sent wirelessly to smartphones or other devices, enabling actions such as making phone calls or sending messages with brushes of fabric.

“In our hyper-digital world, people constantly struggle to be physically present in their environment while maintaining a digital connection,” said Levi Straus’s head of global product innovation Paul Dillinger, who took part in a Google presentation at the gathering.

“The work that Google and Levi’s are embarking upon with Project Jacquard delivers an entirely new value to consumers with apparel that is emotional, aspirational and functional.”