Google is taking a stake in a Silicon Valley-based robotics company that has yet to reveal its first product. 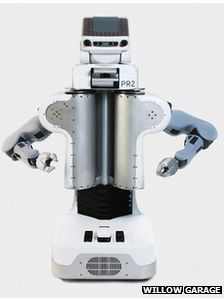 Savioke’s work may be under wraps, but it has announced plans to begin customer trials of a service industry-targeted machine this year.

Google has acquired eight other robotics companies outright over the past year.

Its latest investment may be relatively small but experts say that it should boost confidence in the sector.

Savioke has disclosed a total $2m (£1.2m) of seed finance, which includes cash from other sources in addition to an undisclosed sum from Google Ventures, the search giant’s investment arm.

Savioke was only established last year. However, its chief executive, Steve Cousins, has previous experience in the sector, having launched the PR2 robot – a machine targeted at robotics software developers wishing to try out their code.

“We have decided that it is time for robots to become available widely in the service industry,” Mr Cousins told the BBC.

“We’re not ready to quite disclose what we are going to be doing, but we believe the technology is ripe and this industry is largely untapped.

“There’s a few examples of robots in hospitals that are extensions of a surgeon, but what we are looking at is a little bit more what people traditionally think of as robots – autonomous entities that can do things on their own and can help people out.”

Although he declined to say which sectors would be targeted, his company’s website lists hotels, elderly care facilities, hospitals and restaurants as possibilities.

Mr Cousins was keen to stress that the deal involved Google Ventures – a unit that operates independently of the rest of the California-based company and whose stated goal is to fund the “best companies” rather than ones that are strategic to Google’s other operations.

However, GV’s previous stake in Nest ultimately resulted in Google paying $3.2bn to add the smart thermostat-maker to its main business, and Mr Cousins did not rule out the possibility of his company following a similar path.

“In the end, what we want to see is robots out in the world helping people,” he said.

“So, whatever ‘exit strategy’ leads us to that goal is what we are all about.”

Google’s interest in robotics was preceded by that of Amazon.

The web retailer paid $775m in 2012 to buy Kiva Systems, a company specialising in robots used to move goods in warehouses.

“One of the big questions when you do a robotics deal had always been who is going to buy it if this thing doesn’t go public,” said tech investor Paul Kedrosky.

“It was never obvious. Now that Amazon and Google have self-identified as acquirers, it makes doing robotics deals pretty exciting.”

“In the last few years, it has become clear that the computer industry is no longer primarily about computers – whether it’s post-PC devices, internet of things, self-driving cars, wearables or robots – an entirely new digital industry is emerging where computers fade into the background but digital is everywhere,” he said.

“Google’s move into robotics will make it even more attractive to start-up investors because it accelerates the creation of a new category of opportunities.”

British engineering company Dyson recently announced that it was investing £5m in a robotics lab at Imperial College London.

One roboticist said he expected more deals would follow.

“It’s pretty clear that with an ageing population there is a fantastic business opportunity for creating technology that is not only going to improve people’s quality of life but also extend their working lives,” said Prof Chris Melhuish, director of Bristol Robotics Laboratory.