Ex-finance minister ahead of rival with 56.44 percent of vote in preliminary results, electoral commission says.

Preliminary results in Afghanistan’s presidential polls have put Ashraf Ghani, the country’s former finance minister, in the lead, but the electoral commission has emphasised that the results are not final. 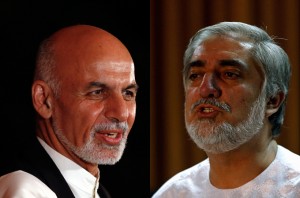 In an announcement on Monday, Ahmad Yousuf Nuristani of the Afghan presidential commission said Ghani, an ex-World Bank economist, was in the lead with 56.44 percent of the vote, while his rival Abdullah Abdullah, a former Afghan foreign minister, had 43.56 percent.

The Independent Election Commission acknowledged that vote rigging had occurred and promised to launch a more extensive investigation before final results are released after the complaints commission recounted a number of votes.

The preliminary result will include all votes from the June 14 run-off vote, with the official result scheduled for July 22 after a period for adjudication of complaints.

The head of the elections commission had also admitted that the vote was far from perfect.

“There were some flaws to it but that’s to be expected, he said, in a country like Afghanistan where security is still an issue where some polling stations couldn’t be opened. Some of the observers and even security officials, he said, were biased in favour of one candidate or the other,” our correspondent reported.

Monday’s announcement came after last-minute talks by the candidates in an effort to try and resolve a standoff over the election outcome.

Ghani’s camp said the two sides had agreed to audit an additional 7,100 polling stations to ensure the final result is clean but Abdullah’s aides said the compromise was not final.

Both rounds of the vote to elect a successor to incumbent President Hamid Karzai have been plagued by accusations of mass fraud, and the refusal by either candidate to accept the outcome could split the fragile country along ethnic lines.

He has accused Karzai of playing a role in the alleged vote-rigging in Ghani’s favour and says he would accept the vote only if he saw firm evidence that fraudulent votes had been thrown out and the final result was clean.

Ghani attracts much of his support from the Pashtun tribes of the south and east, while Abdullah’s loyalists are Tajiks and other northern Afghan groups – echoing the ethnic divisions of the bloody 1992 to 1996 civil war.

The dispute over fraud has tipped Afghanistan’s first democratic transfer of power into turmoil as US-led troops end their 13-year war against the Taliban, and the country faces a new era with declining civilian aid.

In a statement released after the preliminary results were announced, the US State Department said: “A full and thorough review of all reasonable allegations of irregularities is essential to ensure that the Afghan people have confidence in the integrity of the electoral process and that the new Afghan President is broadly accepted inside and outside Afghanistan.”