Hummels’ 12th-minute header gives Germany a 1-0 win over France to move into the last-four at Brazil 2014.

An early Mats Hummels header proved enough for Germany to beat France 1-0 in a tense, error-strewn and largely uninspiring World Cup quarter-final at the Maracana. 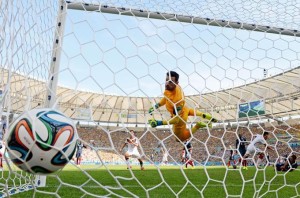 The defender scored the only goal of a match neither team ever took control of when he headed in a free kick from Toni Kroos after 13 minutes.

Germany went ahead when they won a free kick on the left after Paul Pogba fouled Kroos who took the free kick himself and swung a perfectly flighted ball towards Hummels.

The centre back launched himself at the ball and held off defender Raphael Varane in the same movement and powerfully flicked the ball in with it grazing the underside of Hugo Lloris’s bar for his second goal of the tournament.

France took time to respond but came close to an equaliser in the 34th minute when Mathieu Valbuena shot from close range but was denied by a superb save from Neuer who turned the ball away with his left hand.

Germany, the first country to qualify for four successive semi-finals, will meet either hosts Brazil or Colombia in the semi-final next week. The South Americans meet in the second quarter-final of the day in Fortaleza.

Joachim Loew’s side will have to play much better than they did against France to reach their first final since 2002.