The Germany captain and Manchester United midfielder tied the knot with the tennis star in front of their friends, family and fellow sports stars,  two years after getting together.

Ana opted for a simple hair do, leaving her glossy brunette locks loose around her shoulders, while subtle makeup completed her look and emphasized her flawless complexion. The finishing touches was a silver bracelet and a matching watch, while she carried a bouquet of cream flowers and added a touch more sparkle with diamond stud earrings.

The groom meanwhile was smart in a dark suit but ditched the tie to match his new wife’s understated style. 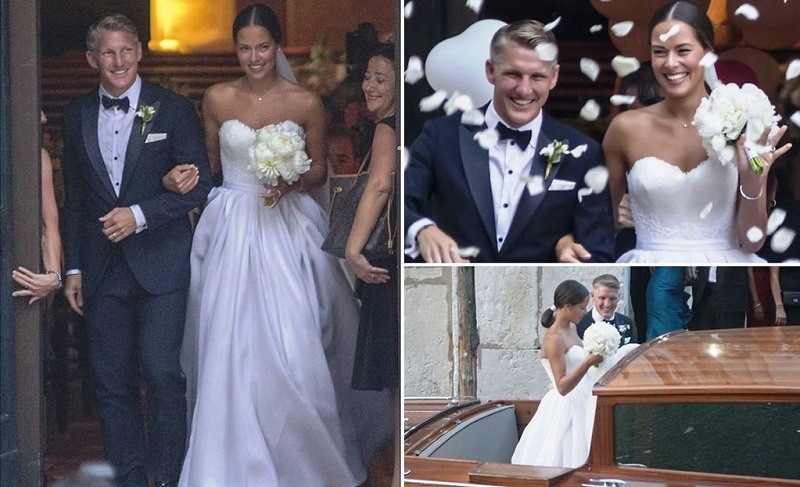 German media claim friends and family did not know where the wedding was taking place, being told to turn up at Munich Airport on Monday morning before being whisked away in a private jet.

The pair, who have been dating since 2014, made it official at City Hall (also known as the fancier-sounding Palazzo Cavalli) before being whisked away in a boat on the canal. While other details remain sparse, athletes Angelique Kerber, Andy Murray and Thomas Muller were reportedly in attendance.

Bastian Schweinsteiger and Ana Ivanovic shared the news on social media which was followed by congratulations messages from the fans:

Congratulations to both of them. pic.twitter.com/OTh8SZfmso

Schweinsteiger and Ivanovic out and about today in Venice, evening before the wedding. 👰🏼💍💅🏻 pic.twitter.com/IsCjdCXfOI