Rival Palestinian factions in the Gaza Strip have united in celebration of the end of the war, but will it last? 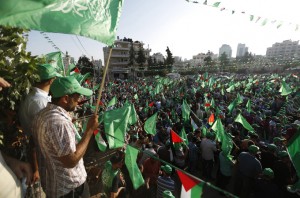 “I started to know more about Hamas over the last 53 days,” he said, explaining that surviving Israel’s recent seven-week military operation in Gaza, which killed at least 2,100 Palestinians and injured more than 10,000 others, has made him a Hamas supporter.

“I like them because they defend us,” said Raef, adding that witnessing the destruction of the 12-storey Zakfer apartment tower made him realize the importance of Palestinian resistance fighters.

“My mom and dad support Fatah’s Abu Mazen [Palestinian Authority President Mahmoud Abbas] but they have sympathy for Hamas,” he added, before disappearing into a sea of green at the rally.

In 2006, Hamas won the Palestinian Legislative Council elections. The victory caused political tension with the PA, which refused to acknowledge the new Hamas-led government because of pressure from the international community and Israel to discount the results.

After the two sides failed to come to a power-sharing agreement, violence quickly ensued, leading to a bloody attempted coup in Gaza in 2007. The occupied Palestinian territories were then divided along factional lines, with the PA controlling the West Bank and Hamas governing Gaza, and political institutions were paralyzed as a result of the split.

According to a recent Palestinian Center for Policy and Survey Research poll, which surveyed 1,270 Palestinians in the West Bank and Gaza after the Gaza war ended, Hamas leader Ismail Haniyeh would win twice as many votes as Abbas in a presidential election. Hamas had an 88 percent approval rating, while the PA had only 36 percent of support.

Despite this, Hamas’ rivals in Fatah – the faction that dominates the PA – have garnered increased support in Gaza after the war: yellow Fatah flags and photos of Abbas can be seen throughout the strip. The support for both major factions has contributed to the sense of unity in Gaza, according to Dr Ahmed Yousef, the chairman of the Palestinian Reconciliation Committee, a body established to urge Palestinian reunification.

“Hamas has now emerged as part of the broader political spectrum, it no longer stands alone,” Yousef, who served as an adviser to former Hamas Prime Minister Ismail Haniyeh. “It is the steadfastness and survival of people which gives a flavor of victory. We are not a superpower … The message we are telling Israel is that we love life.”

Both Abbas and Khaled Meshaal, Hamas’ political chief, met with the Emir of Qatar on August 21, in what analysts described as a sign of Palestinian unity, shortly before the ceasefire agreement was unveiled.

Under the deal, the PA has been charged with administering Gaza’s borders and coordinating reconstruction efforts in the Palestinian enclave with international donors like the European Union, Qatar and Turkey. Long-term issues, such as Israel’s push to demilitarize the strip and Hamas’ demand to reopen Gaza’s seaport and airport, will be negotiated next month.

Meanwhile, after the announcement of the ceasefire, Israeli Prime Minister Benjamin Netanyahu said that Hamas had suffered a “very hard blow”, and did not achieve any of its demands in the agreement. “I think that Hamas is also isolated diplomatically,” Netanyahu said. “I think that we also instilled in the international community the fact that Hamas, [Islamic State group] and Al-Qaeda and other extremist Islamic terrorist organizations are members of the same family.”

But according to Dr Khalil al-Hayyeh, a Hamas leader who was part of the Cairo delegation, the indirect talks between Palestinian factions and Israel was evidence of the end of internal Palestinian divisions.

“Today we are in a new era of unity and have adopted [the rhetoric of] resistance,” he said in a speech delivered during prayer last Friday, adding that all the Palestinian factions would continue fighting Israel if it did not respond to all Palestinians’ demands.

Addressing the rebuilding of the Gaza Strip following the seven weeks of war, al-Shayyeh said that the only body responsible for the strip’s reconstruction, including managing the border to allow the necessary materials in, would be the Palestinian consensus government.

Meanwhile, Mouin Rabbani, a senior fellow at the Institute of Palestine Studies, told source that while Israel’s attacks on Gaza backfired, resulting in greater ties between the Palestinian factions, this togetherness could easily fall apart.

“The Palestinians were not defeated, but can yet defeat themselves if they do not invest their achievements into a coherent national project and instead return to the pattern of seeking petty factional advantages,” Rabbani said.

“Israel’s political leadership was simply too extreme and fractious to identify achievable political objectives, and failed miserably to achieve any objective it did identify, such as reversing recent moves towards Palestinian reconciliation which it in fact strengthened,” Rabbani added.

Sixty-two year old Fatah supporter Abu Mahmoud Braim, from Khan Younis, said the war had made him feel more compassionate towards Hamas members. “Once you see your brothers murdered by a foreign power, we return to what unites us – Palestine and not just factions,” he said, pointing to the killing of three leading Hamas figure sand civilians in Israeli strikes on Rafah, in southern Gaza, as a catalyst that caused him to change his views.

Khalil Abdelhadi, a 31-year-old school teacher in Gaza City, said his support for Hamas has been unconditional, but he cheered on the efforts of the other armed groups, as well. “It’s odd that aggression unites us, but after today, the pain we suffered makes us focus only on ourselves as one with a common enemy: the Israeli occupation,” he told.

Dr Fayez Abuetta, a Fatah leader in Gaza, said that cooperation exhibited during ceasefire negotiations in Cairo proved that factions are able to work together. “We forgot our internal squabbling and focused on what unites us all. Palestinian blood is most important to us all,” said Abuetta, adding that he hoped this new found unity would last beyond the end of the war.

However, on August 28, President Abbas said on Palestine TV that “as long as there is a shadow government in Gaza, there will be no real unity”, in what appeared to be a reference to Hamas. Hamas did not respond to the comment, but many Palestinians are waiting to see whether the Fatah leader will pay 45,000 employees of the previous de facto government in Gaza their overdue salaries.

The PA released a statement on Tuesday announcing that it was making “maximum efforts” to disburse the payments, but gave no specific date for when they would go through.

Gaza-based analyst Ibrahim Al-Madoun told media that failure on the part of Abbas and the PA to deliver the wages to Gaza-based employees could lead to another internal conflict. “If Abbas does not provide salaries, then things may blow up again,” al-Madoun told media.

Meanwhile, Abuetta said that it remains to be seen whether the consensus government will be able to function properly, but he was hopeful that under the supervision of Abbas, it will continue its mandate. This new atmosphere may make it easier for the government to work, he added.

“We have realized we are stronger together. We [can] rely on this united power to strengthen our resistance… [and] better meet to our national aspirations.”