On the top of the chart is Bill Gates, with a net worth of 78 billion U.S. dollars. Gates is not only comfortably the richest man in tech, but also the richest man in the world. In second place is Jeff Bezos, the man behind Amazon who has according to Forbes now amassed a net worth of over 66 billion dollars. Rounding off the top three is Facebook founder and CEO, Mark Zuckerberg, with a total of 54 billion dollars.

Bill Gates retained his long-standing title as the world’s richest tech billionaire, the latest rich list compiled by Forbes reveals, despite a $1.6bn decline in his wealth since 2015.

Facebook’s stock also reached a record high this month, pushing Zuckerberg’s fortune up by $12.8 billion over the past year. The social network beat revenue and earnings estimates in its second quarter, largely thanks to success in mobile advertising and attracting new users. With an estimated net worth of $54 billion, Zuckerberg is now the third richest tech billionaire, up from number four last year.

While the list is dominated by US companies, Chinese e-commerce giant Alibaba and its executive chairman Jack Ma make an appearance at place eight. In 2016, Ma has a net worth of almost 26 billion dollars. Not too far behind him is Tencent CEO, Ma Huateng with 22 billion dollars.

Forbes’ newly released 2016 list of 100 Richest in Tech shows that 75 per cent of the titans on the list are from the US and China, with 51 and 24 tech founders and investors, respectively.

This year’s top Asian tech billionaire is none other than Jack Ma, according to Forbes. He founded and currently heads the Chinese e-commerce company Alibaba. His current net wealth reportedly hovers in the neighborhood of $25 billion.

The second richest Asian tech billionaire is also from China. Tencent founder and CEO Ma Huateng aka Pony Ma has net assets of around $22 billion. Tencent is an internet company that offers instant messaging and other online media services.

The two Hongkong tech billionaires are not only newcomers in the list but are also husband and wife.Yeung Kin-man and Lam Wai Ying co-founded and managed Biel Crystal.

The United States had 51 members on the list. Canada was ranked third with five people, followed by Germany with four. Countries that completed the top ten were South Korea, Japan, Hong Kong, Taiwan, Israel, and India. Singapore tied with the United Kingdom, Russia, and Brazil with one individual on the list. 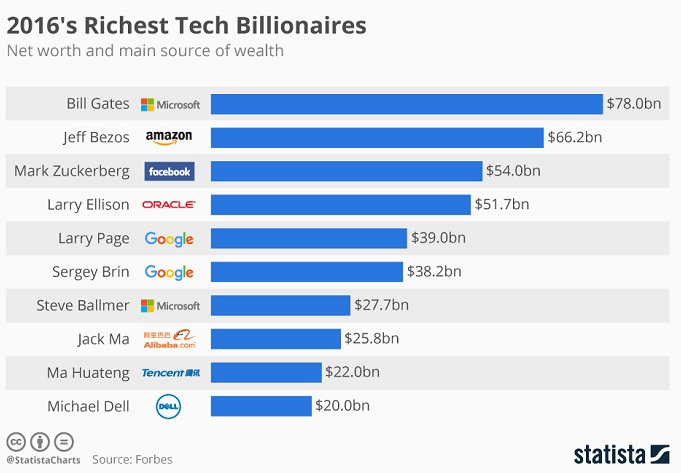