France’s Prime Minister Manuel Valls has resigned from his post as President Francois Hollande, a day after a much-criticised show of insubordination by the country’s economy minister. 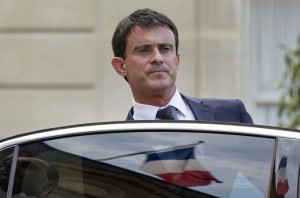 In a statement issued on Monday, Hollande immediately asked Vall to form a new government by Tuesday in line with the “direction he [the president] has defined for our country.”

The new cabinet will be announced on Tuesday and there was no immediate word on who would stay and who would go.

“A major change in our economy policy,” was what Montebourg had said was needed from the president and prime minister.

With those words, Montebourg drew the anger of the Socialist leadership, which said Montebourg’s job was to support the government, not criticize it from within.

“He’s not there to start a debate but to put France back on the path of growth,” Carlos Da Silva, the Socialist Party spokesman, told Le Figaro newspaper.

France has lagged other euro zone economies in emerging from a recent slowdown, fuelling frustration over Hollande’s leadership, both within his Socialist party and further afield.

Thomas Guenole, a French political expert, said that the political feud between Wall and Montebourg is part of an ongoing struggle within France’s Socialist Party.

If Hollande decided to sack Montebourg, who is viewed as a potential presidential rival, he would risk seeing the ousted minister take with him a band of rebel lawmakers and deprive him of the parliamentary majority he needs to push through reforms.

Opposition conservatives, who for weeks have been embroiled in their own leadership rows, called for an outright dissolution of parliament, as did the far-right National Front.

“With half of the presidential mandate already gone, it doesn’t bode well for the ability of the president, or whatever government he chooses, to take key decisions,” said former Prime Minister Francois Fillon, one of handful of hopefuls for the conservative ticket in the 2017 presidential election.

A new survey released at the weekend showed Hollande’s poll ratings stuck at 17 percent, the lowest for any leader of France since its Fifth Republic was formed in 1958.

Valls, a once-popular interior minister, saw his own popularity eroded by his failure to tackle unemployment, which is stuck above 10 percent.