Delivery of the first of two assault ships halted until December amid criticism of Moscow’s role in Ukrainian conflict.

France has suspended the delivery of the first of two Mistral-class warships to Russia “until November” after fierce criticism from its allies given the crisis in Ukraine.

Paris agreed in 2011 to build and sell the two advanced helicopter assault ships to Russia for a total of 1.2 billion euros ($1.6 billion), with the first scheduled for delivery in October or November and the second in 2015. 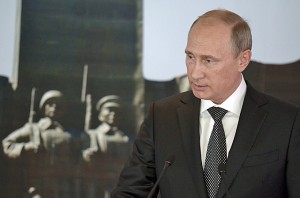 French leaders had refused to back down on a sale seen as crucial to a country suffering from stagnant growth and record unemployment, despite widespread condemnation due to Russia’s alleged involvement in the Ukraine crisis. Kiev accuses Russia of fomenting the rebellion in Ukraine’s east, a charge that Moscow denies.

“The President of the Republic declared that, despite the prospect of a ceasefire, the conditions for France to deliver the first warship are not to date in place,” Francois Hollande’s office announced on Wednesday, on the eve of a major NATO summit in Wales.

The statement came just hours after Russian President Vladimir Putin unveiled a plan to end the four-month war in the former Soviet republic, calling on pro-Kremlin rebels and government forces to cease fire and agree to the broad terms of a truce.

However, Ukraine’s president immediately rejected the plan as an attempt to deceive the West about Moscow’s real intentions.

“This latest plan is another attempt to pull the wool over the eyes of the international community ahead of the NATO summit and an attempt to avert the EU’s inevitable decision to unleash a new wave of sanctions against Russia,” Petro Poroshenko said in a statement.

US President Barack Obama, on a highly symbolic visit to former Soviet republic and new NATO member Estonia, said it was “too early to tell” if the ceasefire deal would hold on the ground.

His trip comes one day ahead of a NATO summit in Wales, where the military alliance will discuss Ukraine’s crisis.

The first point of the Russian’s president’s plan is a “halt to active offensive operations by military forces and armed rebel units” around the rebel strongholds of Donetsk and Lugansk, Putin said in televised comments during a visit to the Mongolian capital Ulaanbaatar.

The roadmap also calls for a withdrawal by Ukrainian forces to positions from which they cannot shell cities, and a halt to air strikes by Kiev’s military.

The blueprint also calls for deploying international observers to monitor a ceasefire, the unconditional release of all prisoners, the establishment of corridors for refugees and humanitarian aid, and the dispatch of aid to rebuild infrastructure in Donetsk and Luhansk, which have been the brunt of intense fighting.

“I believe that a final agreement between the authorities of Kiev and southeastern Ukraine can be reached and cemented during a meeting of the Contact Group on September 5,” said Putin.