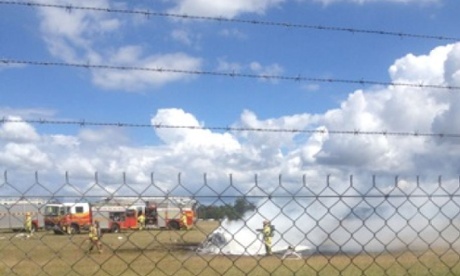 Five people are dead after a light plane carrying a group of skydivers crashed and burst into flames at an airfield north of Brisbane as family members of those aboard watched in horror.

Witnesses said the Cessna 206 disintegrated in a fireball after coming down shortly after taking off from the Caboolture airfield about 11.30am on Saturday.

Police said there were five people on board and no survivors. The names of the deceased have not yet been released, nor has that of the skydiving company involved.

A police spokeswoman said it was believed some of the families of those killed were at the airfield to watch the skydive.

It’s understood two skydiving companies operate from Caboolture airfield, which has been shut down by police.

Two investigators from the Australian Transport Safety Bureau were travelling to Caboolture from Brisbane and three more were due to arrive from Canberra later on Saturday.

A bureau spokesman said they would examine the wreckage, interview witnesses and study the weather to find out what went wrong.

Airport safety officer Bryan Carpenter said he saw the crash, adding that the plane, which was loaded with high-octane fuel, was destroyed by flames within a minute of impact.

He said the plane veered to the left after take-off before plunging to the ground and catching fire.

It took firefighters 10 minutes to douse the inferno, with another witness saying the fire was out of control when he arrived on the scene.

“It was hard getting close. You can’t put that type of fire out with hand-held extinguishers,” Mark Thompson from the Caboolture Warplane Museum said.

Both Carpenter and Thompson said it was the worst crash they’d seen at the airport.

“They’ve had a couple of incidents here but nothing like this,” according to Thompson, who ran about 200 metres to the scene after hearing a loud thud and seeing a plume of smoke.

Carpenter, who has worked at Caboolture for 14 years, said the crash could have been caused by any number of things.

“One of the things one would expect would be an engine failure, but the engine was delivering power on touch down,” he said.

“So it’s something mechanical I would say … or the pilot could have blacked out – any number of scenarios; it’s a bit like MH370 at the moment, we just don’t know.”