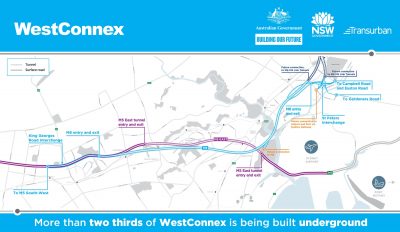 Premier Gladys Berejiklian and Minister for Transport Andrew Constance today travelled underground in the nine kilometre tunnels for the first time to inspect progress on the $4.3 billion project.

“It’s really exciting to see the hard work is almost finished on this crucial nine kilometres of motorway. Once open, the New M5 tunnels will double the capacity of this corridor, which carries around 100,000 vehicles every day and is one of the most congested parts of Sydney’s traffic network,” Ms Berejikilian said.

“The motorway will cut up to half an hour off journeys between Liverpool and the southern suburbs of Sydney. This will mean tens of thousands of drivers can have a safe, reliable and efficient option to spend less time in their car and more time doing what they love.

“Drivers will be able to travel from Beverly Hills to a new interchange at St Peters in around 10 minutes, with new connections to Alexandria and Mascot.”

“We’re going to see huge travel time savings on the M5 East too, with trips cut in half and travel speeds expected to double during peak time, improving journeys to the airport and Port Botany,” the Deputy Prime Minister said.

Minister for Transport Andrew Constance said the finishing touches are being applied to the tunnels with the mechanical and electrical fit-out nearing completion.

“There are currently 1,000 tradespeople working to complete the project, with more than 18,000 workers involved over the project’s lifespan,” Mr Constance said.

“The fit-out is almost finished with line marking work underway and the installation of 33,000 wall panels more than 90 per cent complete.

“We’re also in the final stages of system testing which marks the home stretch ahead of these tunnels officially opening.”

The New M5 Tunnel will open with two lanes in each direction but has capacity to upgrade to three lanes, and include connections to future projects including the M4-M5 Link Tunnel, M6 Stage 1 and Sydney Gateway to the airport and Port Botany.

WestConnex is being delivered in four major stages, including the New M4 (now open), the New M5 tunnels, and the M4-M5 Link Tunnel and Rozelle Interchange, opening in 2023.

When complete, WestConnex will provide drivers with a 33km road network, bypassing up to 52 sets of traffic lights.