Finland, Norway, Iceland, Denmark, Sweden, Switzerland, US, Germany are among the most literate country in the world, according to a new study.

The Nordic countries dominated the list of Most literate nations, with Finland in first place and Norway in second, and Iceland, Denmark and Sweden rounding out the top five.

The World’s Most Literate Nations study, conducted by John W. Miller, president of Central Connecticut State University in New Britain, Connecticut, analyses trends in literate behaviour and literacy in more than 60 countries. It found that Nordic countries are among the most literate in the world, but countries in the Western Hemisphere didn’t do well.

“The power and value of being literate in a literate society is played out every day around the world,” says the report. “Many individuals, and even whole societies, make considerable sacrifices to become literate just as others take it for granted. Societies that do not practice literate behaviour are often squalid, undernourished in mind and body, repressive of human rights and dignity, brutal and harsh.”

“The Pacific Rim countries, Singapore, South Korea, Japan and China, would top the list if test performance were the only measure. Finland would be the only non-Pacific Rim country to rank high. When factors such as library size and accessibility are added in, the Pacific Rim nations drop dramatically” said John W. Miller. 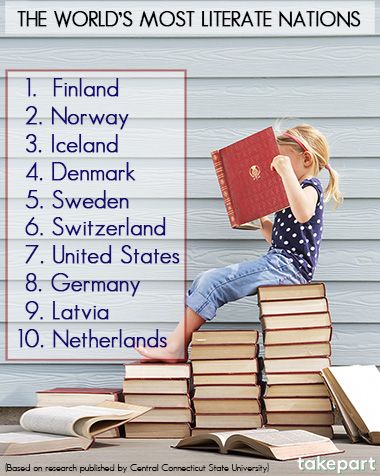 The rankings look at variables related to tested literacy achievement — scores on the PIRLS or Progress in International Reading Literacy Study, and on the PISA, Program for International Student Assessment — as well as to literate behaviour characteristics. Those include 15 variables grouped in five categories: Libraries, Newspapers, Education System-Inputs, Education System-Outputs and Computer Availability, as well as population, which is used for establishing per capita ratios.

Miller said that a consistent finding from the report was that “there is no meaningful correlation between years of compulsory schooling and educational expenditures on the one hand and test scores on the other”.

He believes that Finland, Norway, Iceland, Denmark and Sweden took the five top slots in the study because “their monolithic culture values reading”.

By households with computers