Tony Abbott and Joe Hockey inherited a mighty fiscal mess from Kevin Rudd and Julia Gillard, just like the NSW 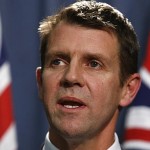 Liberals & Nationals Government when we were elected three years ago.

The Federal and NSW governments are completely united on the need to be fiscally responsible: sustainable Budgets are the foundation on which you can boost front-line services, build new infrastructure, and extend protections for the vulnerable.

But we were left scratching our heads when Canberra released a budget that punished state and territory governments – and taxpayers — for mistakes for which they were not responsible.

Three years ago, when I inherited the job of Treasurer, I set about reversing Labor’s big-spending, high-taxing approach here in NSW. I did not outsource our problems to another jurisdiction.

It wasn’t easy — Labor and the unions fought us every step of the way. But we as a government made the tough decisions and got our own house in order. We did the hard yards and we didn’t pass the buck to others.

We totally understand the need to rein in spending in Canberra. But to rip $80 billion out of the states and territories, without warning, is a kick in the guts for the people of NSW.

The biggest challenge to the state budget is the massive growth in spending on health. Our ageing population is like a time-bomb ticking under the health budget, which by 2050 will consume nearly 40 per cent of total revenues.

What Canberra is now saying to us is that we should be solely responsible for looking after the state’s hospitals, but without the funding to cover the cost. By anyone’s measure, this simply doesn’t add up.

Under the agreement we signed with the Commonwealth, their share of hospital funding would have gradually increased from around 30 per cent currently to just over 40 per cent by 2050. Following the Budget, that share would fall to 13 per cent. This simply renders our long-term finances unsustainable.

I have hosted the state and territory leaders since the Budget in Sydney to sit down and work out our next step. We decided we won’t sit idly by and let Canberra slash billions of dollars from our budgets. We have asked for an urgent COAG meeting to resolve the budget emergency.

Tony Abbott and I are good mates. On most issues we agree; on this one we don’t. But we are mature enough to conduct a sensible debate about the issue, and arrive at an outcome that serves the communities we represent.

What I can promise the people of NSW is that I will be standing up for your best interests and taking the fight to Canberra.

That’s what you elected this Government to do — to stand up for you and to put NSW first.