Stefano Domenicali admits that it is ‘time to make a significant change’ after his six years as team boss ends.

Stefano Domenicali resigned as Ferrari team principal and will be replaced by Marco Mattiacci, president of Ferrari North America. 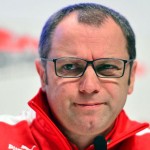 Domenicali stepped down after six years in charge following a poor start to the season.

“There are particular moments in everyone’s professional life in which you have to have the courage to make difficult and very agonising decisions,” Domenicali said.

“It’s time to make a significant change. As chief, I take on the responsibility of the situation we are in and it is a decision made with the desire to do something to shake things up and for the good of this group.”

Domenicali replaced Jean Todt at the end 2007 and helped Ferrari win the constructors’ championship in his first year in charge. However, the team has failed to secure a driver’s title under his guidance.

Felipe Massa was close in 2008, while Fernando Alonso lost out in the final race in 2010 and again two years later.

Ferrari has not won a race since Alonso’s victory at the Spanish Grand Prix almost a year ago, the team’s worst run in nearly 20 years.

It was hoped the new changes to the sport would help turn the tide but Ferrari has remained off the pace.

Ferrari President Luca di Montezemolo attended his first grand prix of the season this month in Bahrain, where he watched Alonso and Kimi Raikkonen finish ninth and 10th, respectively.

“I thank Stefano Domenicali, not only for his constant dedication and effort, but also for the great sense of responsibility he has shown, even today, in always putting the interests of Ferrari above all else,” Di Montezemolo said.

“I hold Domenicali in esteem and I have watched him grow professionally over the 23 years we have worked together, I now wish him every success for the future.

“I also want to wish all the best to Marco Mattiacci, whom I know to be a highly regarded manager and who knows the company well. He has accepted this challenge with enthusiasm.”