Washington, DC — From global warming to international terrorism, we all have fears about the future of our planet.  But whether you’re more faithful or more skeptical, when it comes to shaping public policy, it couldn’t hurt to take a tip or two from the academics—right?  This week, a DC think-tank released its World Future Guide, with essays on the current state of politics by ten leading experts in various fields.  From different angles, they’re all focused on the same topic: Where are we headed, and what can we do about it?

The authors are all Fellows at the Secular Policy Institute—and “secular” suggests that while they each come to the table with their own strong viewpoints, they’re big advocates of evidence.  And while feeding paranoia is easy when discussing heavy contemporary issues, there’s reason to believe that people want the facts.  Worldwide, 16% of the population claims no religious affiliation, making this belief group the third largest after Christianity and Islam.  In the United States, the “Nones” are growing particularly strong in number as voters.  A separation of church and state has become increasingly paramount in countless regions of the globe, especially as LGBT people fight for recognition and atheist writers get threatened and murdered in Bangladesh and France.

SPI connects prominent thinkers—such as Taslima Nasrin, Elizabeth Loftus, A.C. Grayling, and John McWhorter—with the world’s leading decision-makers.  So the Guide will be as much for politicians as for public consumption.  It is a collection of findings and recommendations on trends in law, education, and healthcare, including practical advice on defense and surveillance technology, on the Islamic/Western ideology conflict, and of course, on the interplay of religion and government.

“The Guide’s ten articles are written by Fellows from seven countries,” said SPI CEO Edwina Rogers, “and each is committed to a rational approach.” 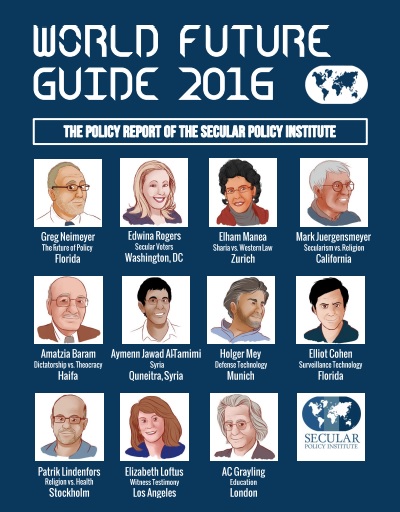 Some tips you might take away from this digest: How about how to spot a dictatorship before it forms?  Or how to tease out the benign aspects of Islamic faith from those that encourage gender discrimination?  Or even how to reap the health benefits of certain, more adaptive religions, while avoiding the hazards of religious warfare?  Whatever you get from it, reading the Guide should be a win: You’ll either calm your biggest superstitions about what’s to come, or you’ll arm yourself with all the information you need to duck for cover.  If you learn from what you read, you might even be able to help influence some positive changes on our lonely planet Earth—before it’s too late.

“The world’s future is coming, whether you like it or not,” states the Guide’s introduction.  “Here are the keys.”

The World Future Guide collects the public policy recommendations and findings on demographic trends from the foremost fellows at the Secular Policy Institute. Leading thinkers give research and opinion on law, education, and healthcare, practical advice on defense and surveillance technology, the big picture trends on the interplay between secular government and religion, and more.