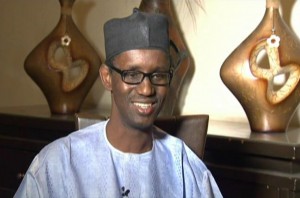 The move is seen as a boost for President Good luck Jonathan, whose PDP has been reeling from high profile corruption scandals.

Analysts said his move was a big blow to the opposition All Progressives Congress (APC), Reuters news agency reported.

A report by Ribadu’s team in 2012 showed Nigeria lost out on tens of billions of dollars in oil and gas revenues over the last decade from deals struck between multinational oil companies and government officials.

The PDP secretary for Adamawa state, which holds a by-election on October 11, told Reuters that Ribadu had applied to contest the primaries on a PDP ticket.

Jonathan and the PDP face a national election in 2015 that is likely to be the most closely fought since democracy was restored in 1999.

Ribadu, who ran for president against Jonathan in 2011 elections but only got 5.4 percent of the vote, did not immediately respond to a request for comment.

Former president Olusegun Obasanjo hired Ribadu as chairman of Nigeria’s Economic and Financial Crimes Commission (EFCC) from April 2003 to December 2007 and he earned a reputation for going after seeming untouchables in the fight against rampant corruption, even at risk to his own life.

Jonathan has been beleaguered by defections of senior figures and criticism of his government’s failure to deal with Islamist militant group Boko Haram.

But several senior figures have defected to the PDP from the APC, underscoring how fluid Nigerian politics can be as the elite jostle for position ahead of a poll. They include popular two-term ex-governor of Kano state Ibrahim Shakarau.

“In terms of electorate Ribadu hasn’t got much influence, but he was seen as clean and anti-corruption”, which had benefited the opposition’s fight on an anti-graft ticket, Lagos-based consultancy 46-Parallels partner Kayode Akindele said.

“It shows there’s no political ideology. Everyone just uses parties as a platform … APC could see more defections if the PDP is seen as being in the ascendancy,” he said.