Portugal shrugged off an early injury to Cristiano Ronaldo to claim a first-ever major tournament trophy thanks to Éder’s 109th-minute strike.

PARIS (France) – A thundering out-of-the-blue shot by substitute Eder gave Portugal a shock 1-0 win over France in the European Championship final 2016, as they secured their first major international title despite losing captain and talisman Cristiano Ronaldo to injury.

Eder collected the ball in midfield, held off his marker and fired a low 25-metre shot past Hugo Lloris with 11 minutes of extra time left to stun the Stade de France after the home team had dominated the match.

France nearly snatched a win in stoppage time at the end of 90 minutes when Andre-Pierre Gignac’s shot rebounded off the post while Raphael Guerreiro hit the crossbar with a free kick for Portugal in extra-time.

Portuga’s coach Fernando Santos and the other players paid tribute to Ronaldo’s role in urging the team not to give up in the tense match at the Stade de France. Ronaldo returned from treatment at the end of 90 minutes to give pep talks to his teammates.

Portugal snuck up on this tournament after drawing all three games in the group stage and finishing third. It didn’t beat any of its opponents in regulation until the semifinal win over Wales. But over the course of those games, Santos’s men grew into a mean defensive unit.

France spent 450 million euros ($500 million) preparing 10 stadiums for Euro 2016 which could be the last hosted in one country. Euro 2020, the 16th tournament, will be held in 13 cities in 13 different countries from Azerbaijan to Wales. 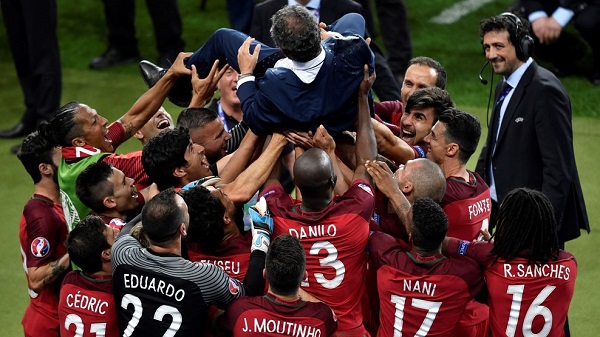 Portugal’s players celebrate Portugal’s coach Fernando Santos after their 1-0 win over France in the Euro 2016 final football match between Portugal and France on July 10, 2016

Portugal midfielder Renato Sanches has been named as SOCAR Young Player of the Tournament at UEFA EURO 2016. The award winner – open to all players born on or after 1 January 1994 – was chosen by the UEFA technical observers, led by UEFA chief technical officer Ioan Lupescu and including Sir Alex Ferguson and Alain Giresse.

Sanches scored his first goal for his country that night in Marseille, making him the third-youngest player to register in a EURO finals fixture. He went on to both star in the last-four victory over Wales and, against France in Saint-Denis on Sunday, become the competition’s youngest-ever finalist at 18 years and 328 days and its youngest winner – Portugal prevailing 1-0 to claim their first major title.

Playing in his fourth UEFA European Championship, the 31-year-old was finally able to lift the Henri Delaunay Cup in the wake of his side’s 1-0 extra-time success against the hosts at the Stade de France. It was another memorable moment for the Real Madrid forward, who has been leaving a lasting impression on the tournament since taking his first steps as a 19-year-old at UEFA EURO 2004. 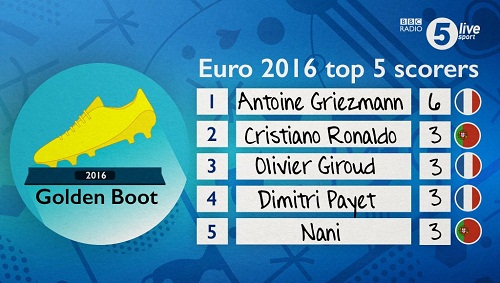