MEPs have backed rules for a banking safety net to minimise the risk of further EU taxpayer-funded bailouts. 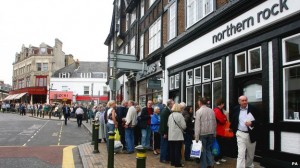 A new European authority will have the power to wind up or restructure failing banks – the so-called Single Resolution Mechanism (SRM).

The shake-up of bank rules is aimed at preventing crises such as those which hit Greece, Ireland and Cyprus, whose banks were bailed out at huge cost.

In future creditors and shareholders will be first to pay when a bank fails.

The EU “banking union” reforms will create a 55bn-euro (£45bn; $76bn) fund, financed by bank levies, so that emergency cash can be injected into failing banks.

That rescue system will be advised by the European Central Bank (ECB). The 18 eurozone countries will participate in the SRM, though countries waiting to join the euro can also sign up to it.

Some analysts say that the rescue pot is too small, and that the eurozone still does not have credible backstops to deal with a major systemic failure like the 2008 financial crisis.

That crisis showed the risk of “contagion” when banks with cross-border operations got into trouble.

EU Financial Markets Commissioner Michel Barnier said the SRM “will allow for the timely and effective resolution of cross-border and domestic banks, over a weekend if necessary”.

He said the package of banking reforms “enshrines in binding rules the principle of bail-in, so that shareholders and creditors pay for banks’ mistakes, not taxpayers”.

One of the European Parliament’s lead negotiators on the package, Vicky Ford MEP of the UK Conservatives, said the UK would not pay into the SRM or take on any liabilities for eurozone members’ decisions.

“This shows that if the eurozone countries choose to integrate further, they can do so without requiring non-euro countries to hand over our own powers or paying our taxpayer money to a currency which we have chosen not to join,” she said.

From November the ECB will start directly supervising the eurozone’s biggest banks, with powers to overrule national authorities.

As part of the package, MEPs also approved tighter regulations to protect all bank deposits up to 100,000 euros in the event of a bank failure.

Under the deposit guarantee scheme, customers will be able to receive the total amount guaranteed within seven working days, if a bank is in trouble.

The reimbursement schemes for taxpayers will be financed by a bank levy, with common rules applying to each EU country.