Human rights groups say at least 25,000 people have been detained in the past year, while dozens have died in custody.

Cairo, Egypt – Amr was arrested in March while having a cup of tea with two friends at a coffee shop in downtown Cairo. 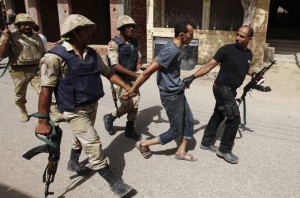 Four months later, the 17-year-old remains in jail, accused of involvement with Ansar Bait al-Maqdis, an armed group in the Sinai that has claimed responsibility for a number of armed attacks against Egyptian security forces.

“We didn’t hear anything about him for 70 days,” Amr’s sister, who requested anonymity. “Then we discovered he was kept for a week in Azouli military prison, where he was brutally tortured by the police.”

After days of torture, Amr confessed to being a member of the armed group. “He has suffered from heart disease since he was a child,” one of Amr’s friends, who also requested anonymity, said. “He was tortured with electricity and was scared that he would die because of his weak heart.”

Amr’s story is not unique: Cases of torture inside Egyptian prisons have reportedly increased since a security crackdown began on supporters of ousted Egyptian President Mohamed Morsi and other dissidents across the country.

Abdallah* was also imprisoned. He said he was tortured after police arrested him following a demonstration to mark the third anniversary of Egypt’s 2011 revolution. Although he was released in March, he still faces charges, including possession of weapons.

His wife found out about the abuse he had gone through during family visits. “They kept him in the cold winter weather for hours with his hands tied behind his back and threw cold water on him,” she told to Local media.

Of course, allegations of abuse by Egyptian authorities date back to before the military takeover of July 2013. Samir*, a 17-year-old originally from Sudan, was arrested in May 2013, when Morsi was still in power. His family said he was tortured for more than three weeks.

“They took him from Mohammed Mahmoud street in downtown Cairo and they brought him to the Abdeen police station,” Samir’s mother told. “They charged him with setting a police car on fire, but the attack happened the day before Samir was downtown.”

In jail, he was kept in a basement and a group of policemen beat him every day, according to his mother. “They kept him in a one-square-metre cell in the basement without food or bathroom,” she said. “There was a hole in the centre of the cell instead of the bathroom, and it was cleaned only every five days.”

Since his release in March this year, Samir has suffered from psychological problems because of the torture and requires the help of a therapist, his mother said. “At the moment, he cannot see people wearing white clothes because they remind him of prison.”

Accusations of torture in Egypt have existed long before the 2011 uprising that overthrew longtime President Hosni Mubarak.

Before the protests began in 2011, Human Rights Watch released a report that outlined the country’s endemic use of torture, stating that Mubarak’s government “implicitly condoned police abuse by failing to ensure that law enforcement officials accused of torture are investigated and criminally prosecuted, leaving victims without a remedy”.

Between 2006 and 2009, Egyptians filed hundreds of complaints detailing police abuse, but only six police officers were convicted of torture.

One of the most prominent cases was that of Khaled Said, who was beaten to death outside an Internet cafe by two policemen in Alexandria in June 2010. After widespread media attention, demonstrations, and the Facebook page We are all Khaled Said, which received more than four million “likes”, the two officers were sentenced to seven years in prison for his murder. Later, the sentence was extended to 10 years.

Rights groups have had difficulty recording instances of more recent torture because they are prevented from visiting those imprisoned by the authorities. “We did our report(s) interviewing people who were already released because we are not allowed to enter the Egyptian prisons,” a spokesperson for HRW told.

“The Egyptian police system needs to change; torture is a well known practice that has not stopped in the three years since the revolution,” the HRW official said.

Evidence collected by Amnesty International and HRW showed that since July 2013, several detainees have disappeared in secret military prisons with no judicial oversight.

Egyptian human rights organizations, such as the Egyptian Center for Economic and Social Rights and the Egyptian Initiative for Personal Rights, have also documented 30 cases of people being secretly held in Azouly military prison inside Galaa Camp in Ismailia, 113km northwest of Cairo.

Families and lawyers are not allowed to visit prisoners in military jails. Amnesty International interviewed several people who survived the torture, and they said that around 400 detainees are being held with no charges in the three-stored prison block.

The Egyptian authorities have denied all the allegations made by the human rights organizations. The National Council for Human Rights, a government-linked organization, set up a commission to inspect conditions inside Egyptian jails and denied that torture is an “endemic practice” in Egypt. It found that the only problem was a lack of comfortable accommodation and medical assistance.

In July, Abdel Fattah Osman, the head of the interior ministry’s public relations department, declared on the ONTV satellite channel that the reports about torture “have nothing to do with reality or logic”. He added: “Egyptian jails have become like hotels.”

But the families of alleged torture victims strongly dispute this. “My son will never be like before his detention,” Samir’s mother told. “I hope that one day there will be justice for all the people who have had their life destroyed by the Egyptian Security Forces.”