Egypt’s former military chief Abdel Fattah al Sisi has won the majority of the votes in the country’s presidential election, according to results announced by his campaign. 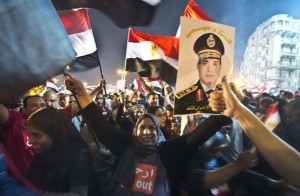 Sisi’s campaign said early Thursday that the former military chief has won a landslide victory with more than 92 percent of the votes over his sole opponent Hamdeen Sabahi, who managed to gain only 3 percent.

It said Sisi won nearly 24 million votes while left-wing politician Sabahi took over 730,000. Over one million votes have been declared void.

The former military chief’s campaign says the turnout nationwide was around 44 percent, even after voting was extended for an additional day Wednesday as a result of a lower-than-expected turnout.

The Muslim Brotherhood movement and pro-democracy groups had boycotted the election.

Critics say the very low turnout at the polls showed the public discontent with Sisi.

The official results of the vote are not expected to be released until June 5.

Sisi’s victory would place Egypt’s presidency back in the hands of a top military official just three years after Egyptians rose up against former dictator Hosni Mubarak, an air force officer who ruled Egypt for nearly three decades.

Anti-government demonstrators have been holding protests on an almost daily basis since Morsi’s ouster by the army. Rights groups say 1,400 people have been killed in the violence since his ouster last year.