Cairo Criminal Court sentenced Saturday 102 supporters of ousted president Mohamed Morsi to 10 years in prison, and two others to seven years, on charges of murder and rioting.

The defendants were arrested last July following a protest in Cairo’s Al-Zaher district, after the ouster of Morsi, who hails from the Muslim Brotherhood. 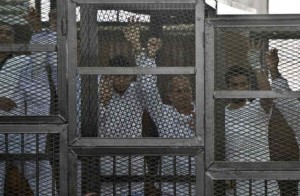 The protests led to the killing of Ahmed Salah El-Bassiouny, for which the defendants were accused of murder.

Pro-Morsi protesters have refused to acknowledge Egypt’s interim authorities and have held near-daily demonstrations in the nine months following the Islamist president’s overthrow, often ending in violent confrontations with police and their political opponents.

Thousands of Muslim Brotherhood members and supporters, including Morsi himself and the group’s top leadership, are currently detained or facing trial on a variety of charges, some of which could lead to the death penalty.

The Brotherhood was declared a terrorist organisation by Egypt’s interim government in late 2013.