OPENER Ed Cowan has scored his first Test century and Michael Clarke his 20th as Australia moved closer to safety in the first Test against South Africa.

Cowan and skipper Michael Clarke batted through the first session of the fourth day to provide Australia with a platform for a big total in reply to South Africa’s first innings of 450 at the Gabba.

At lunch Australia was 3-214, and trailing the Proteas by 236 but with seven wickets in hand. 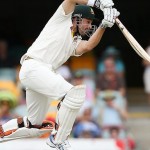 Cowan was 98 and Clarke 78 but the 30-year-old opener showed signs of pressure in the final over of the session bowled by Proteas’ paceman Vernon Philander.

But Cowan did not have to wait long into the tea session, completing the milestone in the second over with a boundary off the bowling of Philander.

Clarke revealed his class in bringing up his sixth century midway through the second session as Australia comfortably moved beyond the follow-on target of 250.

Cowan previous highest score was 74 which came against India at the WACA in January earlier this year.

The Australian had compiled a fourth-wicket partnership of 174 at the break, surpassing Mark Taylor and Mark Waugh’s set 169 against South Africa in 1993 in the Boxing Day Test in Melbourne for the previous record against the Proteas.

Cowa and Clarke have fought well after the home team slumped to 3-40 yesterday upon Ricky Ponting’s dismissal for a duck.

Interestingly the Proteas were 3-357 at lunch yesterday and South African went on to score 9-450. They were unable to use a 10th batsman due to the Achilles tendon injury for spinner Jean-Paul Duminy but the centuries by Hashim Amla (104) and Jacques Kallis (147) provided the foundations.

The home side resumed this morning at 3-111, with Cowan also within a whisker of a milestone – his fourth half-century for Australia – as he returned to the crease on 49 with Clarke on 34.

The best of the South African bowlers is Morne Morkel with two wickets.