An Ebola quarantine centre in Liberia has been looted by a gang who reportedly took bloodstained sheets and forced 17 patients to flee, raising the chances of the virus spreading.

The attack happened at a unit in the West Point area of Monrovia late on Saturday. Rebecca Wesseh, who witnessed the attack, told the AFP news agency on Sunday that the gang were mostly young men armed with clubs. 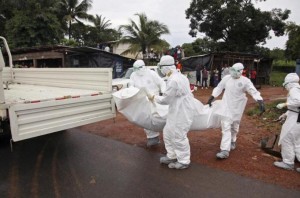 Wesseh said she heard the attackers shouting anti-government slogans and insisting there was “no Ebola” in Liberia. “They broke down the door and looted the place. The patients have all gone,” she said.

The head of Health Workers Association of Liberia, George Williams, said the unit had housed 29 patients who were receiving preliminary treatment before being taken to hospital.

“Of the 29 patients, 17 fled last night. Nine died four days ago and three others were taken by force by their relatives,” he said. “They had all tested positive for Ebola.”

The AP news agency quoted the assistant health minister, Tolbert Nyenswah, as saying residents of West Point were angry that patients had been brought from other parts of the capital to the center.

The agency reported that bloodstained sheets and mattresses were taken. Ebola is transmitted by bodily fluids.

The Ebola outbreak has already killed 1,145 people in five months in Liberia, Guinea, Sierra Leone and Nigeria. Liberia has the worst toll, with 413 people dead.