Airlines ended more services to African countries hit by the Ebola outbreak that has left more than 1,400 people dead as health ministers prepared for a summit to deal with crisis. 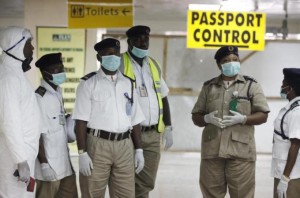 Air France agreed to a government request on Wednesday for a “temporary suspension” of services to Sierra Leone, leaving its capital Freetown and Monrovia in neighboring Liberia with just one regular service, from Royal Air Morocco.

The decision came a day after British Airways said it was suspending flights to Liberia and Sierra Leone until next year due to Ebola concerns.

Health ministers from west African nations hit by Ebola will gather in the Ghanaian capital, Accra, on Thursday to discuss responses to the epidemic.

Authorities in the worst-hit nations are scrambling to contain the most serious outbreak of the lethal tropical virus in history.

The UN’s envoy on Ebola, David Nabarro, earlier this week took a swipe at airlines who have scrapped flights to Ebola-hit countries, saying the growing isolation “makes it difficult for the UN to do its work”.

Brussels Airlines has cancelled several services in Liberia, Sierra Leone and Guinea. The carrier said it would decide on its future schedule this weekend.

The company committed to providing three separate flights to Freetown, Monrovia and Conakry this week in response to passenger demand and to deliver 40 tonnes of medical supplies from the UN.

Only Royal Air Morocco has vowed to stick to its normal flight schedule.

“Our approach is supportive rather than mercenary,” airline spokesman Hakim Challot said.