Ukraine football club will not be playing a friendly at Spartak Moscow as planned due to political situation. 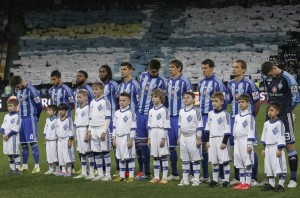 Ukranian side Dynamo Kiev have refused an invitation from Spartak Moscow to play a friendly to officially open their new stadium, the ‘Otkritiye’ (Open) Arena in July.

“We have decided to go back on our agreement with Spartak because of the current political situation between Ukraine and Russia,” the club said in a statement. “We do not think it is the right thing to do to travel to Moscow.”

Spartak Moscow and Dynamo Kiev were the most successful clubs and also bitter rivals before the break-up of the Soviet Union and they were set to open the new 44,000-seat stadium.

The ‘Otkritiye’ Arena will also host matches in the 2018 FIFA World Cup, which will take place in Russia.