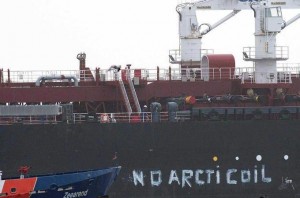 On Thursday the environmental group sent two ships, plus a fleet of rubber rafts, paragliders and activists to meet the Mikhail Ulyanov, a tanker chartered by Russia’s state-controlled oil company, Gazprom OAO.

Activists painted the words “No Arctic Oil” in white letters on the hull of the Russian tanker and hung the same slogan on a giant canvas on one of their own ships. After several hours, the Ulyanov was able to dock safely.

Greenpeace opposes oil production inside the Arctic Circle, warning of the danger of a spill in a pristine and difficult-to-reach area – as well as the threat of worsening global warming caused by using fossil fuels.

Rotterdam police spokesman Roland Ekkers said Peter Willcox, the captain of the Rainbow Warrior, had disobeyed police orders to move his ship. Ultimately police arrested Willcox and towed the vessel to a different part of the port. A further 30 activists were detained for trespassing or blocking the Ulyanov’smooring place on rubber rafts.

Willcox was one of a group of 28 activists and two journalists arrested by Russian authorities last year and charged with piracy after a protest near Gazprom’s Prirazlomnaya offshore Arctic platform. They spent months in a Russian prison before being released shortly before the Winter Olympics in Sochi earlier this year.

“The fight to stop Arctic oil drilling is one of the defining battles of our time,” said Greenpeace International Executive Director Kumi Naidoo. “We will not be intimidated, and we will win.”

Stanislav Chichin, the captain of the Ulyanov, said the Greenpeace action violated “fundamental principles of international conventions for safety at sea as well as environmental safety”.

“Manoeuvring in the confined waters of a port is no less dangerous than sailing in the Arctic, especially when another vessel is trying to interfere with a tanker transporting 67,000 tonnes of crude oil in an area of high intensity shipping,” he said.