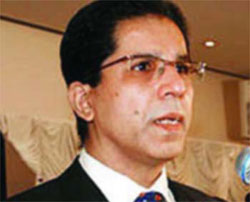 According to the report published on the BBC Urdu website, the Metropolitan Police’s press office told the BBC late on Friday that MQM chief Altaf Hussain’sbusiness address was searched for a period of two days.

An officer of the Metropolitan Police, named only as Jonathan, told the BBC over the telephonethat the office was raided on Thursday and a comprehensive search was completed by Friday evening, says the report.

The MQM is a member of Pakistan’s ruling coalition government and is the largest political party in the commercial hub of Karachi.

Meanwhile, Pakistan’s Ministry of Foreign Affairs said in a statement released late Friday that it would be premature and wrong to draw any conclusion about the raid.

“We are confident that the investigation would eventually help clear all misgivings about MQM which is not only a coalition partner but also represents secular forces in the country,” said thestatement by the Foreign Office spokesman.

It was reported on Friday that the police had raided a business office in London with the MQM leader’s murder, and that some important documents had been taken into custody.

However, the BBC reported on Saturday that the Metropolitan Police officer did not give any details about any evidence recovered from the office.

An investigation regarding Imran Farooq’s murder is currently underway, the BBC reported the officer as saying.

It was also reported that several people were interrogated but no one was taken into custody.—Agencies