ISLAMABAD: Prime Minister Nawaz Sharif on Thursday awarded 3G and 4G mobile spectrum licences to the successful mobile operating bidders and said that true development in the country was only possible through modern technology. 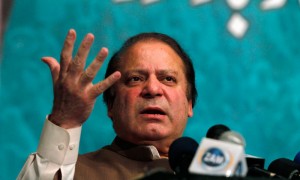 Premier Sharif, who was the chief guest on the occasion, said that the government was trying to tackle challenges on various fronts and that the country would be left in a stable, energised and developing state at the end of his government’s tenure after four years.

He told the attendees of the function that only after the acquisition of modern technology could the country realise the dream of tangible development and also briefed them over the policies adopted to increase foreign investment in the country and to tackle the energy crises.

Following the auction held by Pakistan Telecommunication Authority (PTA) in April, the government raised $902.82 million in the first auction for 3G mobile phone networks and $210 million for the 4G spectrum.

Winning mobile operators for 3G Licence include Mobilink, Telenor and Ufone, while ZonG was declared successful for both 3G and 4G Licences.

Last month’s auction of the 3G and 4G licenses was challenged in the Islamabad High Court in a petition submitted by a citizen which contended that the bidding process was not carried out in a transparent manner and was conducted in violation of the code and conduct which caused a huge loss to the national exchequer.