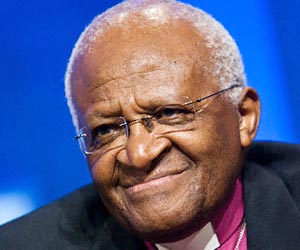 “I’m glad that Madiba is dead. I’m glad that most of these people are no longer alive to see this,” Tutu told South Africa’s Sunday Times newspaper, referring to what he saw as the slow pace of change in the 20 years since apartheid.

His comments were published as South Africa was celebrating the 20th anniversary of its first all-race elections that ended decades of racial oppression under apartheid and brought Mandela to power as its first black president.

“I didn’t think there would be a disillusionment so soon,” the Anglican archbishop emeritus was quoted as saying.

Tutu, 82, who is still regarded as a moral beacon in South Africa, had confirmed on Wednesday that he would not vote for the ruling ANC in the May 7 elections.

He has been openly critical of current President Jacob Zuma’s graft-tainted administration, but on Wednesday chose also to highlight the positives over the two decades since the fall of apartheid.