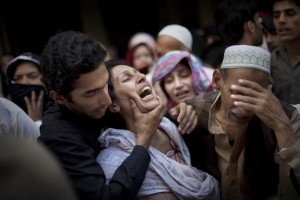 After every tragic incident of barbarism, inhabitant of our country wait desperately to watch who’s going to condemn the act in shortest span of time & who remain diplomatic & quiet.

2014 brings nothing new for Pakistan & very first month started with assassination of SSP CID Chaudry Aslam in a furious suicidal attack who was considered to be the bravest & toughest cop of metropolis of Karachi. As expected anti state militants outlaws TTP ( Tehrik-e-Taliban Pakistan ) claimed the responsibility. Breaking news, revelation & condemnation related to his murder replaced by another calamity when a Satellite van of a private news channel being targeted leaving innocent & poor cameraman, technician, driver & a guard deceased in a cowardly attack. Once again credit goes to TTP who this time admitted their great act of atrocity in a live talk show on same TV channel of slain employees belonged to. A Senior Journalist was almost looking incapacitated begging killers not to attack their people. Spokesman of TTP warned all media networks of more attacks in future if they continue with propaganda against their noble cause.

Another day kicked off in Islamic Republic of Pakistan with a mega news & bigger havoc when convoy of armed forces of a nuclear power state targeted by same militants in Bannu,KPK left 22 soldiers martyred & around 30 wounded. TTP spent no time to announce their yet another victory declaring the attack was part of their war against secular system in Pakistan. What a slap on state of Pakistan? In return whole nation have been assuaged with strong condemnation, lamentation & statements made by our democratic leaders. No assurance of preventing the nation from such miseries & devastation being provided neither by the government of Pakistan nor by armed forces after each ignominious act of terror.

At the other end officials of armed forces can be heard numerous times issuing statement ‘ We shall never let terrorist to be victorious in their outrageous mission’…My question is what is their definition of word victory?

Terrorist are conducting successful attacks every where they like, Killing civilians, lawmakers, politicians, policemen, soldiers every one they want to. Admitting their brave attacks freely on media. Common citizens have no assurance if they’re going to return home safely after their daily hard work & struggle to cherish their families.

Democratic Federal Government, Sindh Government & law enforcement agencies declaring targeted operation in economic hub Karachi a great success. Newspapers of past 6 months are full of success stories, claiming heroic raids, encounters. apprehending thousands of culprits & seizing a massive collection of horrified weapons from Metropolis of Karachi. If we accumulate the armed confiscated & criminals being arrested we can easily set up a rather powerful military unit than TTP ( Tehrik-e -Taliban Pakistan). Reality is terrorists kills dozens in a span of less than 24 hours on their day. How sad? And what a shame?

Few democratic forces are in favor to conduct peace talks with Militants & few opposed the idea. But none of them are successful to bring peace & prosperity in the country. False promises are being made, Pointless issues have been raised. Infantile statements have been passed in the current regime of hopeless democracy in Pakistan. Ruling parties in each province struggling hard to only pamper their governance for next 4-5 years of electoral duration. Only personal interests are being addressed. No clear road map have been proposed to encounter jeopardy of terrorism.

In result common people living in Pakistan are suffering a big deal. No future can be foreseen for upcoming generation in the country. Pakistan is labelled as a failed state by neighboring countries. In the current race of bringing change & thriving democracy in Pakistan no one is winning…But the terrorists are who aim to destabilize Pakistan, Who’s destiny is to conquer & rule the state. Their mission is to gain the power & resources other wise innocent children & human being wouldn’t have been victimized.