More than half a million Muslims live in Australia. They add to the richness of Australia’s multicultural society and 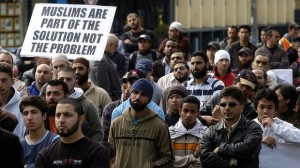 contribute to the health of the Australian economy. The Muslim community comprises a mixture of ethnic communities from Arabs to non-Arabs, Asian to African, as well as Muslims from other Western nations, so naturally their political views on global Islamic issues are extremely diverse. However, Australian Muslim communities are undeniably quiet, loyal citizens. Apart from a few individuals who take a strong political stance, Australian Muslims have demonstrated that whatever the situation may be for Muslims internationally—even if compatriots in their native land are at war—they have to deal with it as peaceful Australian citizens. Notably, very few Muslims have publicly condemned Australian society.

The Australian government and media have outdated lists of ‘traditional’ so-called Muslim leaders who only represent one or two ethnic communities to act as spokespersons for all Australian Muslims. These leaders only convey the views of their own ethnic group, but give the impression their views are representative of the entire Islamic community. Unfortunately, their limited knowledge, lack of wisdom, short sightedness and rigid thoughts are reflected in public statements without realising the impact this has on the broader Islamic community. The skewed opinions they articulate come at a significant cost to the entire Muslim community’s relationship with non-Muslim Australians. For example, in Australia there are significant and highly respected Muslims from Indonesian, Indian, Pakistani, Malaysian, Bangladeshi, Afghani, Yamani and Sudanic backgrounds. These ethnic communities are quite considerable in size but the government focus remains on the Arabic and sometimes Turkish community. Recently, Prime Minister Tony Abbott announced he met with ‘leaders of the Islamic community’ but in reality, he only invited leaders from the Arab community. It is crucial to understand that people from various Muslim ethnic communities have diverse views on local and international political and religious issues. The government should listen to leaders who are representative of every Muslim ethnic community rather than making judgements based on the views of only a few.

A recent government initiative was to invite traditional members of the Islamic community to join a confidential anti-terror discussion forum, however they selected members who are not representative of, or even particularly influential in their own ethnic groups. Calling on a few traditional leaders to discuss anti-terror laws is not an effective way of encouraging mutual trust and understanding with the Islamic community, nor is it going to instil a positive image of Muslims among non-Muslim Australians. Consequently, when Federal and State police recently conducted a large number of raids in Sydney and Brisbane, the broader Islamic community was terrified to hear these stories in the national media. Even their local communities/ethnic media were not informed.

Regrettably, divisions within the Islamic community are a main reason for the failure to nominate one representative who can be spokesperson for all Australian Muslims. These divisions also make it impossible for Australian Muslims to be united on any major political, social or even religious issue. Even the commemoration of religious festivities has become a matter for controversy and dispute. For example, almost every year Australian Muslims from different ethnic or sectarian backgrounds celebrate the major annual festival of Eid on different days. Noticeably, Muslim communities have been powerless to unite their leaders to celebrate holy occasions such as Eid together. The Imams and leaders of individual communities have the final say on such matters. Within the Islamic community, the so-called leaders and heads of various associations and councils have never demonstrated a willingness to unify and consolidate the Muslim community and encourage them to identify as Australian Muslims rather than Lebanese, Turkish, African, Afghani or Pakistani Muslims. These leaders spend more time and energy promoting themselves and when a problem or issue arises, they tend to use it for their own benefit and publicity.

Islam teaches respect for the faith and beliefs of others, and the Prophet Mohammad (PBUH) denounced any form of racism or sectarianism. Nevertheless, the divisions among Australian Muslims are just as racial and sectarian as those that divide Muslims globally. Leaders and members of the Islamic community should understand that when the people of a particular community live in a multicultural, multi-ethnic and multi-religious society, their leaders and representatives have to be open minded, diplomatic, tolerant, forbearing and community oriented. They must uphold and teach all Muslims how to live alongside other cultures and respect others’ faiths, philosophies and beliefs—and leaders of other faiths in Australia should do likewise.

When the Australian government decided to send Australian air troops to Iraq to fight against Islamic State militia (ISIS), members of the broader Islamic community were not consulted on the matter except for a few individuals who were proudly invited to meet with the Prime Minister. In fact, significant numbers of Australians, both Muslim and non-Muslim are not in favour of sending Australian troops to Iraq again after the failure of the US-led war on terror over the past 10 years. Fighting in Iraq, Syria or Afghanistan is not an Australian issue. One can understand the United States’ interest in initiating and engaging countries and governments in war, but not Australia. We are an independent, proud multicultural, harmonious nation. We should maintain this status in the world rather than become an unconditional ally of the US. Of course, everyone is aware that the ongoing wars and terrorist activities in Palestine, Lebanon, Iraq, Syria and Afghanistan have a long history of international involvement. Repeatedly sending troops to the Middle East and Afghanistan to fight a war that is nothing to do with Australia is not in our country’s interest.

The recent death of an 18-year-old man, Haider, who was shot by a police officer after he allegedly stabbed a counter-terrorist officer, is very unfortunate. Such incidents are deleterious to our harmonious, peaceful society. Law enforcement agencies and respected leaders representative of the broader Muslim community should join in wholeheartedly condemning the incident and work together to raise awareness that such behaviour is unacceptable as well as investigating the root cause of the incident. Why would a young man go to a police station with a knife and have the courage to attack police? So far, the media has only reported the police’s account of the event, but this is a very serious question for all Australians. A Sheikh’s provocative statement on the incident is unhelpful for both the Islamic community as well as law enforcement agencies. Similarly, the hostile and one-sided statement from the police spokesperson imbues a negative impression of the mindset of law enforcement agencies towards Australian Muslims.

To create awareness, maintain harmony and educate the Australian community as a whole about Australian Muslims, politicians and Islamic leaders from a broad range of cultural and ethnic communities, together with senior officers from the law enforcement agencies must cooperate, and be more open minded and truthful with Islamic communities as well as the Australian public.