Death toll from flooding in India and Pakistan exceeds 400, as both countries warn of more damage in the week ahead.

Islamabad, Pakistan – The death toll from flooding in India and Pakistan is now more than 400, officials say, as both countries warn of more damage in the week ahead.

The floods in northwestern India and northeastern Pakistan have affected almost a million people in both countries, killing at least 203 in Pakistan and 200 in India. 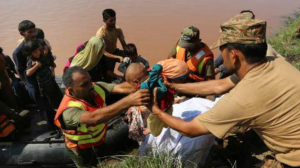 At least 12 people were killed in Lahore on Tuesday when the roof of a mosque collapsed during afternoon prayer. The collapse was blamed on the effects of the downpours.

In India, rescue efforts have focused on southern Kashmir and the main city of Srinagar, with about 400,000 of the 1.2 million population still stranded, the PTI news agency reported.

M Nusrat, a resident, said there were only five boats in use in the Rajbagh area of the city, one of the worst hit.

“People stranded on top floors are asking for drinking water and food. Not many have been rescued. Some people are using plastic water tanks to float and reach the rescue points,” he said.

Rescue efforts in Pakistan, meanwhile, have focused on Punjab, where the flood peak continues to pass through barrages and rivers, officials at the Punjab meteorological department told Tribune International.

Helicopters are being used in both countries to rescue those trapped in remote locations and drop emergency supplies.

Cities in the Punjab, including Lahore, Hafizabad, Wazirabad and Gujranwala have been flooded torrential downpours.

Several barrages and other river flow control mechanisms have had to be breached along the Jhelum and Chenab rivers in order to manage the flood, officials said.

“One issue that needs to be addressed is trying to take the people away from the main course of the river, which always is the problem,” said Ahmed Kamal, a spokesman for Pakistan’s national disaster management authority.

Rescue efforts, meanwhile, continue in the affected areas. On Tuesday, Pakistan’s military said it had rescued 1,500 people in northern Punjab, and established more than 50 relief camps.

Pakistani authorities say they have saved more than 18,000 people in total, using helicopters and more than 500 boats in the worst-hit areas.

With flows of water above the designed limits for many of Pakistan’s barrages, Kamal warned that there was a constant threat of “human error” leading to further flooding.

Moreover, he added, the passing of the flood would only signal the beginning of the real relief work.

“One thing I should say very clearly: it will take some time, and the emergency situation will prevail for quite a while.”