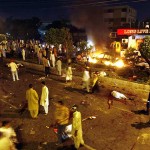 In Karachi, during the past few months, the factories are being targeted by arsonists and criminal gangs. Who are these arsonists? The government does not know. The law enforcement agencies are not aware. The people cannot find out where they come from. Even if the people know them, they cannot disclose their identities for fear of terrible revenge. This largest and port city of Pakistan  is being economically choked by mafias that are enemy agents, racketeers, religious dissidents and robbers abetted and sheltered by power politicians, the feudal lords, the bureaucrats or the self proclaimed barons.

This trend of attacking and burning the industrial units is fraught with dreadful economic backlash both for Karachi and Pakistan. If the factories and mills are closed down or gutted by the avengers, then the people would lose jobs and there would be more poverty. The exports would suffer too.

The fleecing and blackmailing of the industrialists and mill owners is easy and more lucrative than robbing the shopkeepers and the common traders. What one could get from several retailers could be obtained several times more from one factory owner. If the factory owners refuse to oblige or delay in responding to the dictate of the pitiless ruffians, their factories are torched resulting in deaths of workers. We have seen many factories in the recent past gutted by the ruthless blackmailers. The burning of these factories was due to the deliberate foul play and not because of the other causes.

In September this year more than 300 people perished in two devastating factory fires in Pakistan. At least 280 people died at a garment factory in Karachi; in a horrendous blaze. Close on the heels another fire broke out at a shoe factory in Lahore resulting in the death of 21 workers. This Friday (October 26) a tissue paper manufacturing chemical factory in Karachi’s Shershah area was burnt.

The lives of residents in Karachi have remained unsafe for many years now. Even today 7 citizens of this country lost their lives. These killing sprees carried out by power gangs, extortionists, outlaws and crime cartels have become a part of the daily life in Karachi. Those who wake up in the morning and set out for their work places would not be sure if they would return alive to join their families.

Death and destruction stalk the streets of Karachi. The brazen and unrelenting extortion by multiple groups through telephone calls and paper slips is now a familiar pattern to rob people. If the demands of the thugs are not met, they kill or kidnap their targets. The ordinary people as well as the small and big businessmen in Karachi are at the mercy of the human blood hounds and savage predators to play with their lives, honor and peaceful living of the citizens. Traveling has become hazardous in that city.

The city of Karachi remains under a pal of fear, harassment, intimidation and threats round the clock from rampaging and trigger-free murderous gangs. At the end of the day, the rescue and relief teams start picking up the dead bodies or the injured in full media glare. It is a ghastly recurring spectacle witnessed by army top brass, the ministers both provincial and federal, the president, the prime minister, the parliamentarians, the members of bureaucracy, and the intelligence services. Yet no one moves or seems to be serious to curb and contain this mayhem.

The bazaars, the shopping centers and the business markets are assailed and controlled by the merciless thugs whose brutality cannot be described in words. The decapitated, bullet ridden and tortured bodies of people are frequently found in the city. The people are kidnapped, the women raped and houses broken in. The properties are forcibly occupied and no power on earth can get those vacated without payment of the demanded price. The children and adults alike are kidnapped for hefty ransoms.

Police force being insufficient and ill-trained has utterly failed to cope with the Himalayan challenge of restoring order and normal life in Karachi. The members of police force also join the criminals in loot and robberies. They provide shelter to the criminals and do not arrest them even if they know them. In many crimes the policemen were discovered to be the accomplices of dacoits.

The political parties are mum and silent, including the powerful MQM and the ruling PPP. The religious doyen of Karachi Jamaat-i- Islami, the stray social factions, the peace makers all are either helpless or deliberately ignore this frightening state of affairs. The leaders who profess to redeem the people of Pakistan and turn this country into abode of peace and unit forget their claims and pledges when they step into power. Power grabbing has become rigmarole between the political parties. The authorities are feigning to be deaf, dumb and unconcerned on these hair-raising happenings that carry ominous foreboding for the economic development of Pakistan already reeling under a continuous crisis of stability and social peace. The whole country presents the doomsday scenario with life getting degraded by myriad socio-economic problems and by dearth and obsolete civic amenities. There is endemic and acute shortage of potable water, the persistent curse of load shedding, and the archaic and insufficient road network. The education, health, public transport and other essential services are miserable and horrifically flawed.

The politicians both out and in power are crooks, urchins and a sleazy lot with shameless countenances. They are protected by bullet proof SUVs, hordes of security staff. They travel with a retina of parasites and stooges. They travel on the roads like pharaohs of Egypt or emperors of Rome, and the richest rulers of a poor and directionless nation.

They have no shame, no honor, and no self-dignity. In fact they are caricatures as if to ridicule the poor and helpless countrymen with their display of galore, extravaganza and sparking style of life. Their glamorous life style stands in sharp and woeful contrast to the unsafe, listless and harassed lives of their countrymen whose predominant majority is impoverished. The people find it hard to feed them and their children, seek justice or relief from police stations, the courts or from the government departments ridden by bribe and inefficiency. ( by Saeed Qureshi – The writer is a senior journalist and a former diplomat)