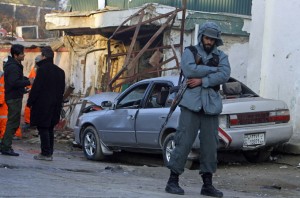 The Taliban quickly claimed responsibility for Thursday’s attack through a text message sent by the group’s spokesman Zabiullah Mujahid, who said that one of the fighters had exploded a car bomb in the northern area.

The explosion occurred at the entry gate into the region. Most of the civilians killed were in a bus waiting to be searched at a checkpoint marking the entrance into Panjshir from Parwan province.

The attacker is said to have been waiting on the narrow mountain road until police approached his vehicle to search it when he detonated the explosives, Khan said.

The ministry of interior confirmed the incident. “Around 5pm, a suicide bomber in a Toyota Sedan detonated his explosives-loaded vehicle,” it said in a statement.

The mountainous Northern Province was an important rallying area for the anti-Taliban forces that helped topple the group’s government in late 2001.

Attacks have been more frequent in recent months, with the Taliban vowing to disrupt presidential elections but it failed to carry out major attacks and the vote went ahead mostly peacefully.

The attacks come as international forces prepare to withdraw and hand security to the Afghan authorities by the end of the year.