SIMFEROPOL, Ukraine: Crimea’s parliament voted on Thursday to join Russia, and its Moscow-backed government set a referendum in 10 days, in a dramatic escalation of the crisis over the Ukrainian region that drew a sharp riposte from U.S. President Barack Obama.

Obama ordered sanctions on those responsible for Moscow’s military intervention in Ukraine, including bans on travel to the United States and freezing of their U.S. assets. He echoed European Union leaders and the pro-Western government in Ukraine in declaring that the 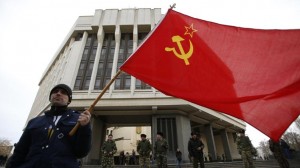 proposed referendum would violate international law. Obama also held a one-hour call on Thursday with Russian President Vladimir Putin, their second phone conversation in the past six days, and urged him to accept the terms of a potential diplomatic solution to the crisis. The sudden acceleration of moves to bring Crimea, which has an ethnic Russian majority and has effectively been seized by Russian forces, formally under Moscow’s rule came as EU leaders held an emergency summit, groping for ways to pressure Russia to back down and accept mediation.

The EU condemned Russian actions in Crimea as illegal, voiced support for Ukraine’s territorial integrity but took only minor steps suspending talks with Moscow on visas and a new investment pact while warning of tougher steps if there is no negotiated solution within a short period. In a signal to Moscow, Obama announced plans to punish Russians and Ukrainians involved in what he called “threatening the sovereignty and territorial integrity of Ukraine”. A U.S. official said Putin was not on the list of those to be sanctioned. “The proposed referendum on the future of Crimea would violate the Ukrainian constitution and violate international law,” Obama told reporters at the White House. “Any discussion about the future of Ukraine must include the legitimate government of Ukraine.” After talks in Rome, U.S. Secretary of State John Kerry said Foreign Minister Sergei Lavrov was personally delivering proposals to Putin to end the crisis in Ukraine. “We have agreed to stay in close touch in order to see if there is a way forward to try to get to a negotiating table to get the parties necessary to be able to stabilize this,” Kerry said. Kerry said the executive order on sanctions signed by Obama on Thursday provided a legal framework for imposing sanctions but also left open the door for dialogue over Ukraine.

The White House said Obama emphasized to Putin in the call on Thursday that Russia’s incursion into Ukraine was a violation of Ukraine’s sovereignty. Obama outlined the terms of a diplomatic “off-ramp” that U.S. officials are promoting, in which Russia would pull back troops to bases in Crimea, allow in international monitors to ensure the rights of ethnic Russians are respected and consent to direct talks with Ukraine officials. The Pentagon announced a large-scale air force exercise in Poland that Washington’s ambassador to Warsaw said had been augmented to reassure U.S. allies in the region in the light of the Ukraine crisis. The U.S. House of Representatives overwhelmingly passed a bill backing loan guarantees for the new government in Kiev. The U.S. Senate is expected to consider a similar bill backing $1 billion in loan guarantees next week. The crisis began in November when Ukrainian President Viktor Yanukovich, under Russian pressure, turned his back on a trade deal with the EU and accepted a $15 billion bailout from Moscow. That prompted three months of street protests leading to the overthrow of Yanukovich on February 22. Moscow denounced the events as an illegitimate coup and refused to recognize the new Ukrainian authorities.