The cricket community worldwide is in mourning today following the death of Phillip Joel Hughes, aged 25. Hughes had remained in an induced coma at St Vincent’s hospital after suffering fatal head injury during a Sheffield Shield match at the Sydney Cricket Ground on Tuesday. Cricket Australia announced the news with a statement from team doctor Peter Brukner: “It is my sad duty to inform you that a short time ago Phillip Hughes passed away,” Dr Brukner’s statement read. “He never regained consciousness following his injury on Tuesday. 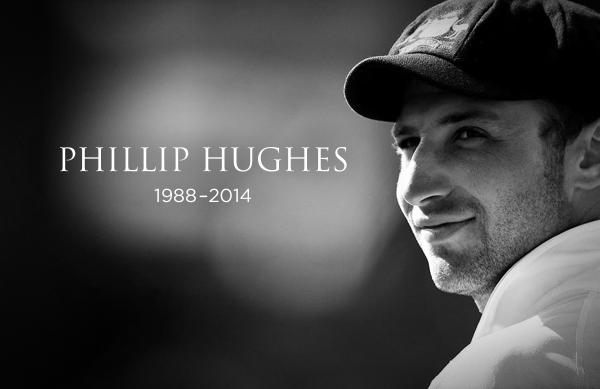 Reaction from Australia and cricket world

Prominent cricketers and sports people from past and present have expressed their deep sadness and shock following the passing of Australian cricketer Phillip Hughes.

RIP you little champ, we are all going to miss you ! Love, prayers to all the Hughes family xxxx

No words can describe the loss Rip pic.twitter.com/3kOm5MkVsc

A very sad day for the world of cricket. So sorry for Phillip Hughes and his family . Spare a thought for Sean Abbott.

Brothers in arms, RIP mate. I will always walk out there forever knowing your by my side. Love you BRAZ!! pic.twitter.com/Qxq2Jy0Pyx

Such terrible news with the passing of Phil Hughes. Our deepest sympathies to his family. — Glenn McGrath (@glennmcgrath11) November 27, 2014

Totally saddened by the passing of our cricket brother and friend Phil Hughes. Terrible loss! Deepest condolences 2 his family! #RIPHughes

Woke up to the news of Phil Hughes passing away. RIP buddy. Thoughts and prayers to friends and family. What a sad day. — Jacques Kallis (@jacqueskallis75) November 27, 2014

Such sad news to wake up to. My deepest most sincere condolences to Phil Hughes’s family and friends.

Heart broken! A very dark day. You will be missed, Phil Hughes. My prayers and thoughts go out to his family & friends. — AB de Villiers (@ABdeVilliers17) November 27, 2014

Rest in peace Hughesy. I am really going to miss you. You were 1 of the great blokes and I will never forget you. #408 will live on forever.

The #BasinReserve joins the rest of our #CricketFamily in remembering Phillip Hughes. pic.twitter.com/fzMRphcHmw

Statement by the England team: Our deepest sympathies go out to Phil Hughes’ family, friends and teammates at this incredibly sad time.

Shocked and saddened by the news of Phil Hughes. Horrible day for cricket. RIP Phil and may your family gain the strength to cope.