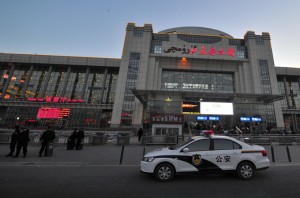 Chinese President Xi Jinping has ordered a crackdown after a stabbing spree and explosion at a railway station left three people dead and 79 wounded in the country’s west, according to state media.

News agency reported quoting Xinhua that four of the people were seriously injured in the blast, which went off outside an exit at the railway station in Urumqi, capital of Xinjiang region, on Wednesday evening, adding that the assailants also used knives, and detonated explosive devices.

“The battle to combat violence and terrorism will not allow even a moment of slackness, and decisive actions must be taken to resolutely suppress the terrorists’ rampant momentum,” Xi said in comments published on Thursday by the official Xinhua news agency.

The bombing was possibly timed to coincide with a visit to the region by Xi, when security was likely to have been heavy.

Ethnic tensions have been simmering for years in Xinjiang, the home of China’s ethnic Uighur Muslims.

On Thursday, dozens of black police vans were parked around the station, while camouflaged police with assault rifles patrolled its entrance.

Despite the security, the station was bustling and appeared to be operating normally.

The People’s Daily, the mouthpiece of the ruling Communist Party, reported on its official account on Sina Weibo, a Chinese version of Twitter, that among the dead were two of the attackers, citing a person or people familiar with the situation.

It said the other fatality was a regular citizen.

Train service was suspended for about two hours before it reopened under the watch of armed police, Xinhua said in reports quoted by the AP news agency.

Dilxat Raxit, a spokesman for exile group the World Uyghur Congress, citing local sources, said more than 100 Uighurs were arrested in the aftermath of Wednesday’s attack.

“Uighurs struggling between despair and survival expect Xi Jinping to come to East Turkestan to give constructive suggestions on improving the turbulent situation,” he said in an email, using the term for the region favoured by exile groups, according to AFP news agency.

“However, the fact is Beijing continues encouraging armed suppression of Uighurs.”

He suggested the situation remained volatile, as “any Chinese provocation would directly incite further turbulence”.

In 2009, a series of riots broke out in Urumqi, leaving nearly 200 people dead, according to official figures.

Despite a heavy crackdown, violence has continued in the region and began spreading elsewhere in the country last year.

Last year, three Uighurs drove a vehicle into crowds in a suicide attack near the Forbidden City gate in the heart of Beijing, killing themselves and two tourists.

In March, five knife-wielding men and women believed to be Uighurs slashed at crowds indiscriminately at a railway station in southwestern China, killing 29 people. The government has blamed the attack on “secession-seeking terrorists.”