KARACHI: A court in Karachi on Thursday granted bail to a US Federal Bureau of Investigation (FBI) agent arrested for trying to board a domestic civilian flight with bullets and a knife in his luggage. 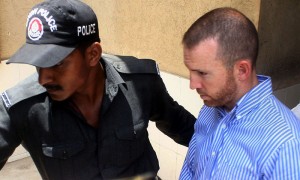 Joel Cox Eugene, confirmed by the US State Department as an FBI agent, was arrested on Sunday at the airport in the southern city of Karachi after trying to board a flight with the knife and 15 9 mm bullets in his luggage, police said.

“The court has approved his bail application and ordered that the American will be released after depositing surety bond of one million rupees,” said senior police officer Rao Anwar.

“He will be released after depositing the surety bond,” Anwar said.