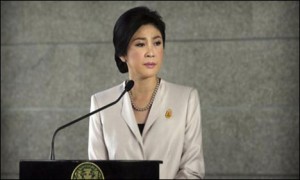 “The judges unanimously rule that Yingluck abused her prime minister status and interfered in transferring (Thawil Pliensri) for her own benefit,” president of the nine-member court, Charoon Intachan, said in a televised ruling.

“Therefore her prime minister status has ended… Yingluck can no longer stay in her position acting as caretaker prime minister. “Several cabinet ministers who endorsed the decision to transfer the security chief will also be stripped of their status.

It was not immediately clear whether the ruling would create a political vacuum or if one of Yingluck´s ministers nominated after Thawil´s transfer would be able to step into her shoes, pending a future election.

Bangkok has been rocked by six months of sometimes violent demonstrations to unseat Yingluck, whose family draws widespread support from the northern portion of the country but is reviled by the establishment in the capital and royalist southerners.