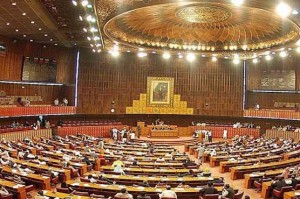 MQM’s committee member Asif Husnain said Protection of Pakistan Bill will mostly be implemented on his party. Opposition parties also objected over proposed right to arrest anyone upon suspicion and over the power to transfer the case to any other court.

MQM recommended five amendments in the bill. The clause to cancel citizenship of arrested suspect was removed upon MQM’s objection. Following which, the committee approved the amended Protection of Pakistan Bill 2014 by majority.According to the bill, an accused can be held for up to 90 days and the transfer of trial from one province to another will also be possible.

The bill also recommends keeping the proceeding of trial of a terror suspect confidential.